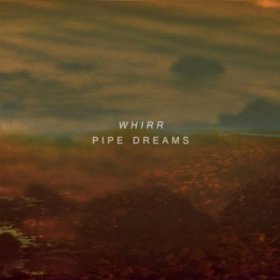 Guitarist Nick Bassett has this predilection for opening his bands' records with guitar strums that sound impossibly human. He doesn’t paint textures so much as he smears them, gripping the listener immediately while surprising them with what comes after. He did it with “Preface,” from Whirr's promising 2010 EP, Distressor (the band were then known as Whirl), and on “Violet,” the stunning opener of Roads To Judah, the 2011 debut LP by his other band, Deafheaven. Here, he does it again with the heartbreaking “Reverse,” with frontwoman/synth op Alexandra Morte contributing her floaty, dissonant coo. It’s followed by the playful pair of “Junebouvier” and “Bogus,” with the latter ending on a more tense note. This see-saw between joy and pain is really what sets the tone for Pipe Dreams: It's a give-and-take between the free and freefall, and it’s presented with a large dollop of influence from early '90s shoegaze, noise pop and post-rock. Whirr’s resemblance to My Bloody Valentine is too close for comfort at times—and, save for “Wait,” Munoz doesn't really seem to enunciate much (putting way more stock in the musical mood than any thematic conveyance). Still, these are forgivable drawbacks: The band conduct their sweeping gestures with atmospheres that can sound so distraught, lost and nauseated (the impeccable “Home Is Where My Head Is”) or jangly and brightly engaging (“Toss”) that any obvious similarities or lack of lyrical understanding is easily washed away.

“Home Is Where My Head Is”