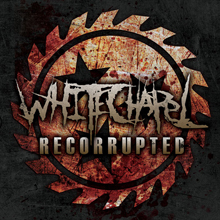 Whitechapel sit alongside Suicide Silence and the Acacia Strain as the current leaders of the heavier-than-thou pack of bands playing extreme metal and brutal hardcore currently fighting their way up from the underground. While it may yet be some time before a full-length follow up to 2010’s A New Era Of Corruption appears, Recorrupted’s five tracks make for a solid stopgap release. With brand new track “Section 8” sat alongside a cover of Pantera’s “Strength Beyond Strength”, two remixes and an acoustic reinterpretation of “End Of Flesh,” the Tennessean bruisers both give their fans what they want and introduce elements that will perhaps test the limits of some of their faithful.

“Section 8” is the sextet doing what they do best: thuggish bludgeoning with a layer of eeriness that will raise the hairs on the back of your neck. Its potential proves the band have yet to peak artistically. The Pantera cover sounds as one might expect it to, drenched in an ugly, low-end-rich guitar sound accompanied by vocalist Phil Bozeman dragging Phil Anselmo’s lyrics into the murk with his guttural roar. While Big Chocolate’s stabbing, robotic remix of “Breeding Violence” is effective in its coldness, the Dillinger Escape Plan’s Benjamin Weinman manages to make his reworking of “This Is Exile” (from the 2008 album of the same name) ethereal, jarring and downright uncomfortable in a manner Whitechapel could never achieve on their own.

The inclusion of an acoustic track may see some full-on metal diehards balk without even hearing it; yet with the band opting to reconfigure it as an instrumental, it is still surprisingly heavy. Moreover, the darkened melodies at the heart of the song shine through, and the apocalyptic tone of the original is somehow amplified in this stripped-down form. Having successfully made such a move, this opens up certain possibilities for the band as they move toward their fourth full-length, though they show little sign of lightening up, sonically or thematically, any time soon—which is a very good thing indeed.