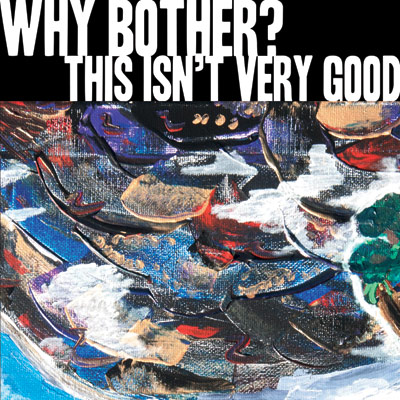 With his second solo release as Why Bother? in the books, the Wonder Years guitarist/keyboardist Nick Steinborn rolls out another five songs of emo rock. That “emotional” part seems to side with self-loathing across the board. The contrasts of his main gig and solo one are observed—Steinborn is a soldier in pop-punk's biggest army performing anthems on Warped's mainstage by day but moonlights as a hopeless 20-something male in his own time.

That separation in popularity speaks to Steinborn's authenticity, in a way. These are his songs. Stepping foot in his head has a tendency to drain you out. The title track opens with “I'm not sure I could be more unproductive,” but to call his bluff, these songs didn't write themselves. Steinborn wrote, performed and recorded everything—that blinking intro riff is a fine shoutout to Midwestern emo. Simple and catchy to get things rolling.

“Parasite” hangs on a guitar melody that doesn't resolve itself, creating tension and a throwback to Engine Down before the space-rock gods shine down on the EP's best chorus. Steinborn's singing style sometimes comes off as cool-headed, but not to the point of not caring.

He pulls a U-turn on “Long Road,” turning up the treble on an upbeat path, singing with all the might stashed in his bearded profile. Sad-sack admissions like “I'm sorry that I'm not ready to be enough” and “You'll find someone else and end up better off” somewhat sully the song's winning potential, though. We might need to call Chuck Ragan in for a pep talk.

An admission on the closer almost feels like a breakthrough. “I exist alone/But I do it to myself.” It's borderline yelled over a post-rock freak-out of Steinborn's walls crashing down, lead guitar fighting its way through the noise cloud. Point taken.