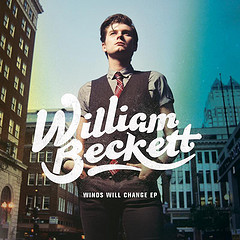 With his second solo release, former the Academy Is… vocalist William Beckett continues in the pop-rock direction his band were headed in while very much doing his own thing. Displaying a playful approach to songwriting and a keen ear for melody, he rewards TAI fans and those new to his output with four solid songs.

Winds Will Change can be divided into two categories—jaunty and organic (“Great Night,” “Scarlett (Tokyo)”) and electro-infused pop (“Warriors,” “Dig A Hole”). “Great Night” proves itself quite irresistible with a huge sing-along chorus Chris Carrabba would be proud of, while the engaging campy melodrama of “Scarlett (Tokyo)” could have been pulled from the score of a Quentin Tarantino movie. However, the bigger, bolder songs make more of a mark. The tightly coiled verses and lush, sweeping choruses of “Dig A Hole” are a perfect counterpoint to each other as they lead to a crescendo drenched in heartache, while “Warriors” surges and stamps its feet in a manner similar to recent Madina Lake, and it does its damnedest to make your butt twitch.

While these two styles might sound somewhat disparate on paper, in the context of the EP they complement each other, tied together by Beckett’s knack for smart hooks and heartfelt lyrics. That he has shown restraint in terms of production, delivering something that is big but not overworked to the point of sterility, is also to his credit. With luck, when he gets around to dropping a full-length he will show similar savvy and will continue to play to the strengths demonstrated here. But for now, this will do nicely.