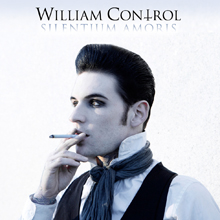 This writer is a record reviewer, not a court reporter, which means he still doesn’t know if the jury is still out regarding what fans of punk/hardcore-based outfits think when those players immerse themselves in electronics-based music. Sure, Skrillex was able to take his jittery programming to the bank—but why is it taking so long to release that second Blaqk Audio album? Fortunately, Aiden founder Wil Francis has made enough music (three albums and one EP) under his nom de plume William Control to make sure his fans know he isn’t merely slumming around. But instead of leaping on obvious idioms (dubstep, sampling Vengaboys) for maximum trend-hopping and licensing opportunities for Kia commercials, Francis embraces everything from post-punk (a cover of Joy Division’s “Atmosphere”), sequencer-pulsing techno (“Romance And Devotion”) and the melodic, industrial-lite stylings of the future-pop subgenre.

The majestic “Failure Of All Mankind” is one of the best songs of 1989, borne out of a contagion infection of Depeche Mode’s Music For The Masses that’s treated with some 21st century plug-in modules. Francis’ militant atheist persona (“Jesus has failed you/Jesus has failed me, too”) comes off not as a pedantic church-burner, but as a character who’s genuinely melancholy about the absence of faith. “Letters To The Other Side” adds a hint of guitar firepower to heighten its urgency and grating programming. “Romance And Devotion” is rave fodder aiding in spreading perspiration stains across VNV Nation shirts. Granted, there are plenty of moments where Francis pegs the LEDs on the bombastic pretentiousness meter: “Kiss Me Judas” will have you reeling around the calf at Sinai, for those times you aren’t spraining your eyes at the spoken-word pieces that bookend the album (after all, the album is titled after an Oscar Wilde poem). But there’s enough retro-familiarity and contemporary programming going around on Silentium Amoris to connect the nü-goths and the old-school industrial rivetheads languishing on message boards wondering if they should start embracing steampunk.

“Letters To The Other Side”