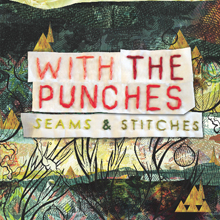 The hardcore-influenced pop-punk field is a crowded one, and it's tough to say that With The Punches are offering much of a fresh spin as far as that style's concerned. But what they lack in originality on their debut full-length, Seams & Stitches, they make up for in sheer enthusiasm and execution.

It wouldn't be insane to draw comparisons to A Loss For Words or early Fireworks with slightly less overt New Found Glory worship. Guitars alternately race, crunch and twinkle while punchy vocals ride the line between grossly cute and grittily raspy. This record works just enough variation and smart melodies (combined with a lyrically keen social awareness) to come out on the winning side, though, from the curiously jangly double-time on opener “Riverside” to the old-school Alkaline Trio riff that initiates the closing title track.

Seams & Stitches is definitely pretty generic, but it's hard to deny it has its moments: the head-bobbing breakdown in “Harvard On The Hudson”; the spiteful chorus of “Postcards”; the aggressive beat of the minute-long “New York Minute”; the intricate web of guitars amid the pointedly critical “Face Value.” Thankfully, there are no cheesy keyboards, unnecessary Cookie Monster cameos or over-the-top mosh parts—just well-done, earnest pop-punk that's worth a listen for its modern lovers.

“Harvard On The Hudson”