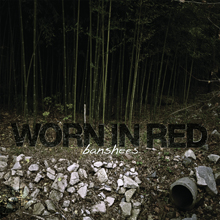 Worn In Red have been one of the Southeast region's best-kept secrets of the last few years. Perhaps it's because they only tour a few months out of the year, but nonetheless, they've been churning out brash, moody punk with post-hardcore angularity, emotional hardcore aggression and melodic restraint since 2007. While their activity is minimal for four dudes trying to keep their day jobs, Banshees, their first full-length since 2009's In The Offing, adds another notch to their impressively consistent belt of releases.

Dual frontmen Brendan Murphy and Matt Neagle don't contrast one another so much as they do tag-team, with hoarse, throaty shouting that makes every track on Banshees feel like a cataclysm. They waste no time with opener “The Road,” which jumps right into the proceedings with the two of them coarsely barking away as soon as “play” is pushed. “Let It Gnaw” adds some of that more grinding intensity their Virginian predecessors Majority Rule and Sleepytime Trio did so well, while the mesh of epic screamo and punky stomping make “I Get It Now” and “Gold Jacket” mid-record standouts. If Banshees has sociopolitical overtones, they're strongest on the Occupy-nodding “White Heavens/Dark Daydreams,” which most clearly skewers the religious(ly lazy) (“If you believe in heaven/Then you believe in TV way too much”) and the rich (“Burn all the country clubs/Kill all the CEOs”). “The Alarmist,” which initially appeared on a 2011 split with Mouthbreather, receives a shorter and sharper readjustment that adds an even grimmer moment to an already fairly dark album.

While Worn In Red have always seemed better filed with Jawbox and Drive Like Jehu than Jerome's Dream and Daniel Striped Tiger, the way Banshees rides the middle ground between those classes of bands is compelling and fresh. Even if the album is short on exaggerated dynamics and glorious climaxes, it's an accomplished effort.