Detroit death metal veterans The Black Dahlia Murder are currently overseas on a European tour in support of their upcoming seventh full-length album, titled Abysmal, which is due out on September 18 through Metal Blade Records. The current run wraps up on July 24 in Slovenia before the band returns home for some much-needed down time before their next outing begins on October 1.

Read more: The Black Dahlia Murder aimed to cause neck pain with “Vlad, Son Of The Dragon"

The band will be headlining the mostly-Canadian, upcoming IndieMerch Tour which is celebrating its 10th anniversary. Support will come from Iron Reagan, Harms Way and Maruta. TBDM vocalist Trevor Strnad shares, "We are beyond excited to bring this mighty line-up to your Canadian eardrums…what a package! We've combined the grinding holocaust of the reunited Maruta, the sheer rage of hardcore's hellions Harm's Way, the thrashing maelstrom that is Iron Reagan and of course yours truly. No venue shall be left standing in our wake! We'll be playing lots of new tastiness from Abysmal for you, as well as the classics, so bring your friends and get ready to bang your heads off. I am looking forward to drinking a Pils, eating some Poutine and raging out with my friends to the great white north. Fuckin' eh!"

You can view the tour flyer and upcoming dates below. Abysmal can be pre-ordered through Metal Blade Records. 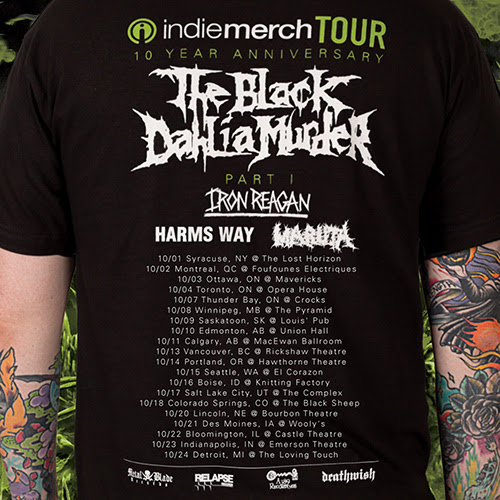