In this recurring column, we’re going to discuss the back stories behind the creation of some of the scene’s most resonant songs with the people who made them. In this installment, Jason Pettigrew spoke with Geoff Rickly, frontman for post-hardcore juggernaut Thursday, about his band’s most famous song. 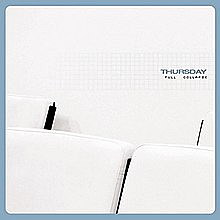 “Understanding In A Car Crash”

At the time, New Jersey-based Thursday were making their second record, and first for Victory Records. But “Understanding” became a flashpoint for post-hardcore, a defining track that was the antithesis of the nü-metal excess and mediocre radio rock, as well as a declaration of intent about the next phase of underground punk culture. The video got MTV traction, more people discovered the band and came to the shows and a lot of other acts started using Thursday as a point of influence.

“We originally thought it was going to be track three on the record,” reveals vocalist Geoff Rickly about their signature song. “And then when we completed it and really listened to it, we decided, ‘Oh, we gotta put that first. That’s it: That’s what our band is.’ It was a defining moment for what we wanted to do, and it took our stylistic endeavors of what we were into—Joy Division, post-punk—and put these things we were into within the realm of hardcore. Then there was the intersection of the personal subject matter where it worked. It was like, ‘This isn’t an exercise. This is where we’re going with [our band].’ It was a changing moment for us, and it was all based on that song.”

The song is based on the death of a friend of yours who died in an auto accident.

Yes. In one car was my girlfriend and my best female friend, and in my car was one of my best friends—who was dating my best female friend—and me. This happened during high school; we’d meet up and go out for school lunches. One day they got into an accident: The girl that I was dating was driving and my best female friend was killed. There’s a lot [in the song] about visiting the hospital afterward and the disorientation of not knowing how to process things. At the time, I was discovering a lot of post-modern literature, and the disconnection between the articulation of despair and the word for it. The great distance between people consoling you and talking to you about the everyday in-and-out of loss, but still not being able to feel anything. The disconnection of emotions from words was a very post-modern thing. I found this way of writing about it that seemed true to me.

There’s disconnection and resignation [in the song]. One of my friends is a crime scene photographer. He got sent out to photograph the accident. It was a horrific accident, and halfway through, he realized it was one of his friend’s cars and he said, “I can’t do this today.” The act of being, “the camera’s glare” and all those things seem to make sense to me in a certain way.

There’s the line, “I don’t want to feel this way forever.” Was that from resignation about the event or trying to reconcile the loss?

That was a big moment for me on the record. Also, the song “Cross Out The Eyes” where secretly, that song was about obliterating the whole authorial me-me-me-this-is-about-me [stance]. We wanted to make a record that was for a community, that engaged a community and wasn't about one person’s concerns but about a cultural concern. For me, writing a lot of songs that were based in the “we,” in detached second or third person, I tried to avoid anything that was a direct emotional plea of any kind—which is why that song is such a huge moment for me on the record. I never said what I felt like, except that there were all these pictures flowing around. There are different layers of things that keep giving impressions so you get an idea of what the narrator is feeling; he’s actually denying it. It’s like a non-answer.

There’s also that wink to Neil Young’s “The Needle And The Damage Done,” which I’m assuming is…

The odometer on the car. I really like inverting references. Full Collapse is filled with references, to the most obscure, hard-to-find, out-of-print poetry to a Neil Young song. When you grow up in America, you become this collection of references, because when you’re growing up, there’s always some external stimulus that’s happening at the same time that’s indelibly marked who you were at that moment. It could be high art or lowbrow: So if I want to talk about the emotional experience, I’ll reference the ad I saw on TV when I got the news [about the accident].

How did the music come about?

Tom [Keeley, guitarist] had the main guitar part and I just loved it. I had actually come up with a version of the same riff he wrote that was a little different from my own. I think we had one different turnaround in the chord progressions, but I feel Tom came up with it. He was working on a ballad that would have a lot of these pull-offs in it. For some reason I thought, “Let’s make it a two-chord progression and speed it way up.” Then I wrote the chorus with the guitar part, and then I convinced Tucker [Rule, drummer] that we should start with that double snare crack—“You gotta keep doing that, it’s super-important. I want to get momentum on this; we’re talking about a car crash.” I drove him crazy. [Laughs.] And then Tim [Payne, bassist] wrote my favorite bassline that he’d ever written over it. After all that, it was the chemistry of the band. I was obsessing over and over about the lyrics. That’s what makes that song a real naked moment for me.

Were you driving everyone crazy with rewrites?

At one point, the producer and the mix engineer found two full, yellow-lined, legal pads that were just [the lyrics] to “Understanding.” For one song. That’s how much I rewrote that. That’s the kind of kid I was back then: I was obsessive about everything I did.

In hindsight, the song has been recognized as the flashpoint for what has become the post-hardcore movement.

Even if it was a flashpoint, it doesn’t mean that we did everything else that goes along with it. It became a song of the moment that galvanized a bunch of other forces that were already at work. In D.C., Q And Not U were doing a more brainy approach to the same thing, a little more mathy. Hot Water Music were doing something a bit more adrenalized. At The Drive-In were wilder and more politically charged.

As far as the greater context, it’s kind of hard to see from the inside. We were consumed in our own world: We were on tour all the time and playing that song every night, so it was hard to see how everything was changing around us. Until a few years later when there were a lot of bands that sounded like that—or were trying to. People were crediting us for changing what people were doing in the underground punk landscape at the time. For a few years, that might have been true. Which is cool, to be one mark on a path that I really love of underground music and its attendant culture.

Filed Under: backtracking, thursday
Categories: Features
Comments
Leave A Comment
Back To Top