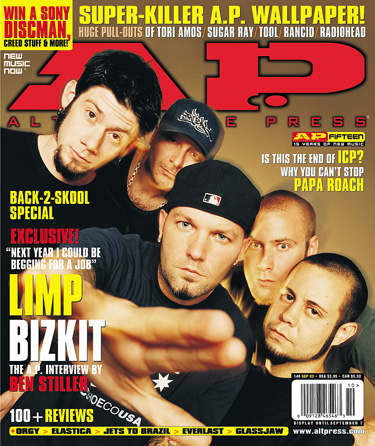 Limp Bizkit
Limp Bizkit didn‘t start the testosterone revolution, they just gave it a name. Tom Lanham infiltrates Bizkit HQ to grapple with the complex motives behind the band‘s new album. Then Ben Stiller sits down with Fred Durst for an eye-opening peak at the frontman‘s future.

Show Us Your Tats!
To celebrate Tattoo The Earth‘s melding of art and noise, the tour‘s illustrated bands expose a little skin art for us. 38 Elastica Britain‘s platinum-selling Elastica are back from the brink, after brushes with breakups and writer‘s block.

The A.P. Back-To-Skool Special
Let A.P.‘s ultimate guide to the hottest music, coolest Web sites and most stylin‘ products take the pain out of learning.

A.P. Wallpaper
Get your eyeball kicks with our new special section featuring huge photos of your favorite acts.

Wiretapping News
Will Insane Clown Posse bring on the end of the world?; the dilly-o in the studio as Everlast wraps up new album; Perry Farrell speaks to Roll Tape; There And Back with Skinny Puppy personality Ogre; and a number of other facts for the ADD-inflicted among you.

Screenings
Get close-up with Cecil B. Demented‘s Jack Noseworthy, then check out this month‘s movie attractions.

BPM (electronica and beyond)
Thievery Corporation reinforce their reputation as masters of the polyglot groove on their second album; DJ J. Davis‘ top spins; reviews of electronica‘s elite; and more.

10 Essential Latin-Alternative Discs
Prepare yourself for the real Latin invasion.