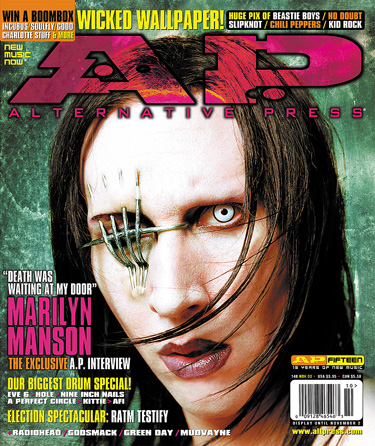 Marilyn Manson
He retreated into the shadows following Columbine with death looming at his door. Now he‘s back with-surprise-his darkest album ever. In this exclusive interview, Manson reveals how he gathered strength and wisdom in his bleakest hour.

We‘ve Got Issues
A.P. rocks the vote with commentary on the Presidential election from Rage Against The Machine, Bad Religion, Chuck D, Jello Biafra and Sleater-Kinney.

A.P.‘s Bang-On Drum Guide
Get in the groove with the tub-thumpers from Nine Inch Nails, Hole, A Perfect Circle, Kittie, Eve 6 and AFI.

Dogstar
Dogstar are not "Keanu‘s band, dude." Find out why these guys are Sirius about the music they create. 69 A.P. Wallpaper Get your eyeball kicks with classy photos of your favorite acts.

Wiretapping News
Nine Inch Nails and the art of falling apart; Pearl Jam launch Euro-live disc set; Godsmack get louder, prouder; Steve Albini rolls tape around the A.P. News Desk‘s throat; the Offspring get fly in the studio; A.P. goes There And Back with the Squirrel Nut Zippers; the summer‘s winners and losers at a glance; things we like and more.

Low Profile
Get the low down on 25 of the hottest bands on the horizon, including At The Drive-In, Mudvayne, Starlight Mints, Electrasy and Julieta Venegas.

Reviews
Reviews this issue of new releases by Radiohead, PJ Harvey, Taproot, Electronic, Roni Size/Reprazent, Dillinger Four, Jimmy Eat World, Titan, Sigur Rós, Miles Davis and many more; Self-Analysis gets an earful from Green Day, Soulfly and the Sea And Cake; Origins Of Cool feels the beautiful noise of the Jesus And Mary Chain; plus reviews of reissues.