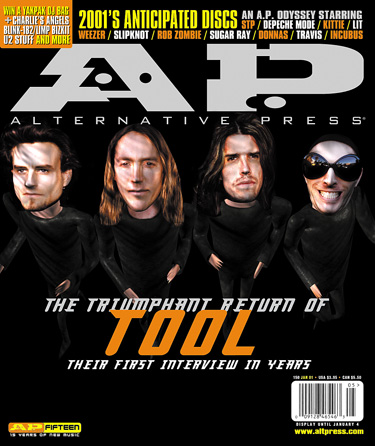 2001: An A.P. Odyssey Into The Future Of New Music
Boldly explore the head- space of artists creating next year’s most far-out sounds.

Screenings
James King and Desmond Harrington-two actors primed to rule the silver screen-come in for their Close-Ups. Plus, reviews of flicks out in time for the holidays and previews of next year’s most promising films.

Wiretapping News
Catching up with the foot-draggers and lollygaggers from A.P.’s previous anticipated-releases features, as well as whom to expect tuneage from next year; plugging into Juno Reactor; A.P. goes There And Back with the Flaming Lips; Pantera’s Phil Anselmo rolls tape around the News Desk’s throat; A.P.’s guide to the cool Christmas records, and all sorts of stuff we compiled to make you forget about the election results.

Low Profile
Get the low down on 25 of the hottest artists on the horizon, including Black Eyed Peas, Electric Company, Nelly Furtado, Union Underground and more.

BPM (electronica and beyond)
The busiest men in underground-electronic music, Two Lone Swordsmen again remind us why their mind/body-stimulating electro is respected by so many; Nightmares On Wax mastermind DJ EASE’s top spins; reviews of electronica’s elite; and more.

Who Do You Think You Are?
Tell us a little about yourself and get some free stuff.

Reviews
Reviews this issue of new releases by the Offspring, Everlast, Pennywise, Eyehategod, Muggs, godspeed you black emperor!, Blue Meanies, Kid606, Doves and many more; Self-Analysis gets an earful from Amen and Less Than Jake.