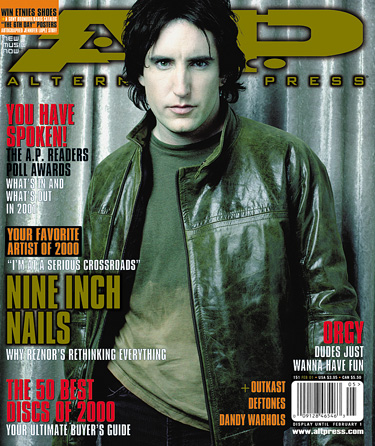 Nine Inch Nails
The none-more-black Trent Reznor-named Best Artist in A.P.‘s Readers Poll Awards-let‘s a little sunshine in while blasting the industry of music, revealing his ambitious plans for 2001 and arguing that fans deserve more from today‘s music.

The 50 Best Albums Of 2000
Never mind the ballots… we school you bitches.

The A.P. Readers Poll Awards
Bizkit backlash? Reznor rules? Deftones dominate? You, the reader, have spoken, and our pages swell with your kind and cruel pronouncements.

Screenings
Glimpse the 10 best movies of the past year, and take a taste of Sugar & Spice‘s sweet actors.

Wiretapping News
The Lyricist Lounge clears its throat for a third season; America gets to attend All Tomorrow‘s Parties; Ogre‘s Welt-raising finally goes public; Ben Folds on a roll (tape); There And Back with coldwave goth-meisters Clan Of Xymox; in the studio with Semisonic and diehard evidence that music gets better when the Republicans are in charge.

Low Profile
Get the low down on 25 of the hottest artists on the horizon, including the Automator, Spineshank, Factory 81, Marz and many more.

Reviews
Reviews this issue of new releases by the Donnas, Godhead, Reflection Eternal, Catch 22, Timo Maas, Cradle Of Filth, DJ Craze, Xorcist, Dieselboy and many more; Self-Analysis gets an earful from Rage Against The Machine and Sick Of It All.