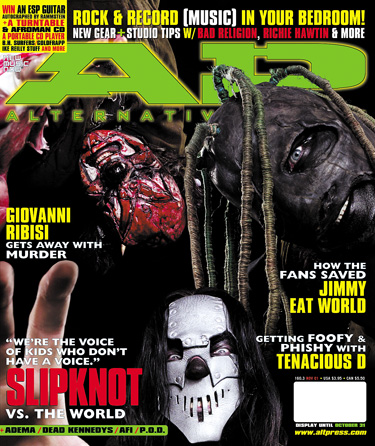 SLIPKNOT
Iowa‘s most daunted may have pushed themselves to the limit on their latest death-metal opus, but the gauntlet isn‘t over until the last metal heretic has fallen. Phil Freeman gets it right.

TENACIOUS D
Are Jack Black and Kyle Gass the Jivin‘ and Carbuncle for Generation Y? Are they the Wisely Brothers for a new generation of apathetic youth? Maybe, as Greg Heller finds out, they‘re just funny as hell.

JIMMY EAT WORLD
When the record business threatened to destroy their band, Mesa, Arizona‘s most emo took control of the situation-with a little help from their fans.

P.O.D.
The harder you rock, the closer you get to God. South San Diego‘s nü-metal soldiers‘ commitment to both the Lord and the rock remain steadfast.

LOW PROFILE
Adema want you to follow their music, not their lineage; bang your head off of Bellvue; witness the expansion of Quasi; get all electro with the Faint. And there‘s always something for everyone in our Lowdown chart.

BOOTY!
Look smarter than you really are with the Booty Literacy Special. (That means "books," by the way.)

SNAG THE SWAG!
Every month we get you cool stuff, and, unlike Santa Claus, we couldn‘t care less how you behave all year.

10 ESSENTIAL GOTH ALBUMS
We separate the real deals from the (ahem) pale imitators among the black-garbed and sinister set.

The Alternative Press staff would like to extend our deepest sympathies to all of the victims of last week‘s terrorist attacks. In light of recent events, A.P. would like to comment on the upcoming November issue of our magazine. Some of the photos of Slipknot, November‘s cover artist, display the words "Kill" and "Let‘s Have A War." The text and images of the cover story are by no means representative of A.P.‘s views of the world‘s current political climate. Production occurs at least two months before each issue, therefore the editorial and photos of issue #160 coinciding with the recent tragic events are completely coincidental.