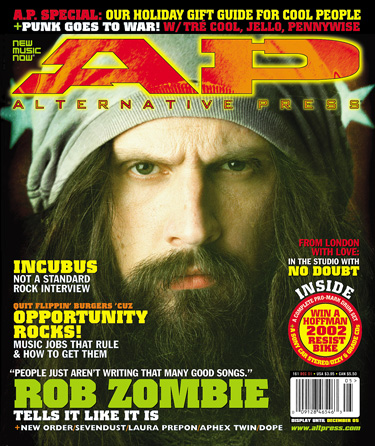 ROB ZOMBIE
Rock’s biggest workaholic hasn’t got the time for self-righteous rock bands, paranoid movie studios or celebrity confessionals. Greg Heller turns up to get his spook-rock on with America’s most twisted mister.

NEW ORDER
After seven years, the archetypal British electro-rockers-or, the guys who wrote Orgy’s biggest hit-have stepped out of the ether and back into the world’s consciousness. Hobey Echlin goes up, down and turns around at their mystique.

DISCLOTHESURE
We approach Incubus with a clothed mind. In turn, they leave A.P.’s Phil Freeman in stitches.

HOLIDAY GIFT GUIDE: MAXIMUM BOOTY!
A.P. presents interesting gift ideas for the people on your shopping list. We’ve arranged the pages by personality type to make it easier for you to match the loot to the lucky saps.

SPECIAL! DOES THIS KIND OF LIFE LOOK INTERESTING TO YOU?
Who makes the Deftones sound good? What the hell is a product manager anyway? Who keeps Blink-182 away from boogeymen? A.P. secures testimonials from the people behind the scenes who make sure the rock keeps rolling.

WIRETAPPING
The role of punk in these dangerous times; rock steady in the studio with No Doubt; reinventing Hope Sandoval; Green Day’s Tre Cool rolls all over the News Desk; Bruce Dickinson is maiden England; along with tidbits, innuendo and an index detailing how knee-jerk terrorist hysteria affects bands in unnecessary ways.

SCREENINGS
Now Showing looks at the newest stuff on the silver screen, as well as fresh DVDs; Close-Up focuses in on That ’70s Show’s sexy tomboy, Laura Prepon.

LOW PROFILE
Score electro-metal angst with Dope; check into Britain’s most fabulous Clinic; get straight with Bent and thrill to New End Original. And just think of the delights found in our Lowdown chart…

SNAG THE SWAG!
With some generosity from us-and a little luck on your behalf-you might be able to do your holiday shopping early.

10 ESSENTIAL COMBAT-ROCK ALBUMS
The link between music and war persists; Michael Azre shows us how and where.