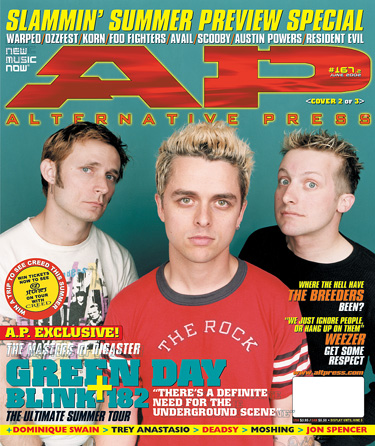 ENTER THE MASTERS OF DISASTOUR
Green Day and Blink-182 have teamed up for Pop Disaster, a road show that’s poised to be the loudest and snottiest concert in recent rock history. Matt Ryan blows the breeze with Billie Joe Armstrong and Mark Hoppus on everything from the tour itself to the enhanced meaning of the term “all-ages.”

DISCLOTHESURE: WEEZER WANT THEIR SWEATER BACK
Weezer founder Rivers Cuomo looks forward to a future where record labels will be extinct and great rock will rule the land. And the clothes don’t look bad, either.

THE BREEDERS
After a whole lotta setbacks and mishaps, the Deal sisters finally grace the world with the follow-up to their 1993 album, Last Splash. Now whom will we make fun of in our future Most Anticipated Records issues?

SPECIAL! THE NOISE OF SUMMER 2002
There’s something for everyone in A.P.’s guide to the summer’s most anticipated discs, tours, movies and video games. Be warned: You might have to get a job in order to afford all of this stuff.

WIRETAPPING
Sociology and slam-dancing mix in The Social History Of The Mosh Pit; some brief moments with Jon Spencer; Judas Priest’s Glenn Tipton makes the association; welcoming Prick back on the electro-rock radar screen; plus more innuendos, band breakups and general disdain; and we trace the history of the Band That Almost Was.

BOOTY!
Check out some kickass summer swag with A.P.’s monthly rundown of the coolest goods you gotta have.

SCREENINGS
Now Showing looks at the newest stuff on the silver screen, as well as fresh DVDs; Close-Up focuses in on Dominique Swain, the former Lolita who’s all grown up.

LOW PROFILES
Getting melodies and rock within Earshot; Strung Out came to play; Nina Nastasia reclines in the air; and the hottest December on record… er, disc. Remember the Lowdown to assuage your radio-hating ways.