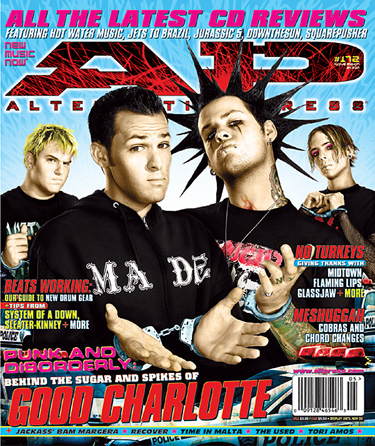 GOOD CHARLOTTE
Loved by girls, dissed by middle-aged punks and questioned by rough boys-and all Good Charlotte ever wanted to do was play the music they loved. Jonah Bayer hits the Vans Warped Tour with these Maryland punks and finds there’s more conviction behind GC’s music than in any city courtroom.

RECOVER
Austin, Texas’ entry in the melodic hardcore sweepstakes are taking control of their career every step of the way. Everything they do, they do for you. What are you waiting for?

MESHUGGAH
Crazy time signatures, venomous snakes and child-sized genitals: It’s all in a day’s work for the members of Sweden’s mightiest metal band.


BEATS WORKING: A.P. DRUM SPECTACULAR
Just in time for National Drum Month, A.P. checks out the new drum gear; gets advice from the rhythmic engineers in System Of A Down, the Dillinger Escape Plan, Sleater-Kinney and F.o.N.; visits the world’s fastest drummer; and learns not to fear the programmers.

GIVE THANKS
Since holiday decorations go up earlier every year, we’re giving props to the Pilgrims a month early. Members of Blink-182, Midtown, Flaming Lips, Queens Of The Stone Age, American hi-fi, Shellac and many others pay respect to the holiday retailers haven’t yet fully exploited.

NEW RELEASES
We preview new discs from Botch, Taproot, Koufax, Add N To (X) and more; get in the studio with Team Sleep, Poison The Well and Paint It Black; and look ahead to l00-plus of the fall’s upcoming releases.

10 ESSENTIAL BLACK-METAL PARTY STARTERS
Okay, so there ain’t much to celebrate in hell, but these discs’ll get your Halloween party started regardless-and in ways Pink never imagined. Just don’t expect to hear these bands on a Martha Stewart-sanctioned comp sold only at Kmart.