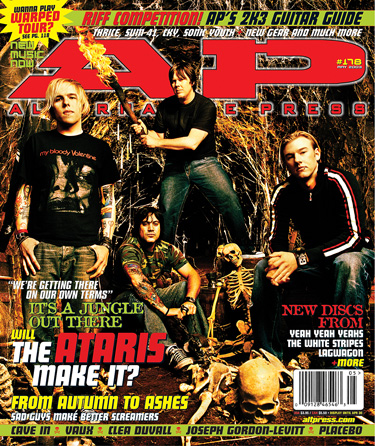 THE ATARIS It’s been a while since Kris Roe went from small-town punk obscurity to major-label hopeful with his band. David John Farinella learns that with strong songwriting and a sense of vision, a simple plan for success isn’t necessary. BLOOD BROTHERSTake everything you ever thought “hardcore” was about and throw it away. Meet the band everyone will be trying to copy two years from now-and failing miserably at it, of course. CAVE INHaving effortlessly crossed over the hardcore-metal hurdles, Boston’s finest are setting the controls for the hearts of space with their major-label debut. FROM AUTUMN TO ASHESMetalcore? Screamo? How about “the anti-Dashboard”? Because with FATA, you get all the crippling depression with none of the mope factor. SPECIALRIFF COMPETITION A.P.’S 2K3 GUITAR GUIDEWe’re celebrating National Guitar Month by compiling our picks for the best new gear and collecting testimonials from the new generation of guitar heroes, including Sum 41, Thrice, CKY, the Dillinger Escape Plan, Ikara Colt and High On Fire. Plus: Sonic Youth put their axes on the line for us, while Black Dice hoard effects pedals.

NEW RELEASESWe preview upcoming discs from Arab Strap, Evan Dando, Elliott, Pleasure Forever, the Bouncing Souls and Powerman 5000; get in-the-studio exclusives from the Starting Line, Pennywise and Coheed And Cambria; and list over 150 new CDs that will prevent you from ever moving out of your parents’ basement.WIRETAPPINGThe A.P. Poll says, “No sellout!” Meanwhile, Ted Leo says he’s not the genius you think he is; Fugazi and Rancid say we shouldn’t get too antsy about their new albums; the White Stripes say no to eBay; Jimmy Eat World’s Jim Adkins says it’s time to raise Arizona; Rob Zombie says home is where the corpse is; and the Clash’s new retrospective says more in two discs than most bands do in a career. All that plus books that rock, games that don’t suck, T-shirts that make us look good, and the usual roundup of speculation and B.S. we call news. SCREENINGSNow Showing scopes the latest in theaters and DVD players; Joseph Gordon-Levitt thinks indie films 3rd Rock; and Clea DuVall tells us everything we think we know about her is wrong. LOW PROFILESVaux rock out; Matchbook Romance will out; and A.R.E. Weapons pass out. Plus nine more things Clear Channel won’t tell you about in the Lowdown. REVIEWSWe review new CDs from Yeah Yeah Yeahs, Autechre, Death By Stereo, Ester Drang, the White Stripes, Rye Coalition and more; Self-Analysis gets up close and personal with Lagwagon and Placebo; Plus, we’re banking Reissue Redux is the first column in history to feature David Bowie alongside Turbonegro. 10 ESSENTIAL ALBUMS THAT DON’T EXISTWe’re always looking back on the best albums in our collections; this month, A.P. gives it up for 10 discs we may never own-a selection of the best deleted, subpoenaed and half-recorded ventures never to hit stores.