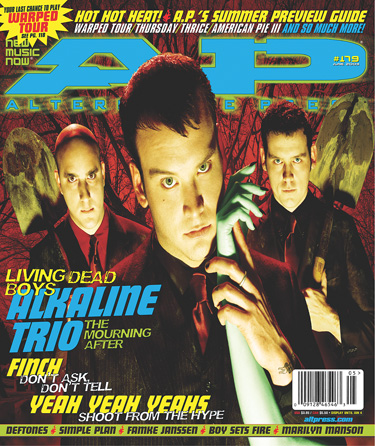 ALKALINE TRIO Are they the Future Of Rock? Are they ruthless careerists? Are they professional alcoholics? Even after spending quality time with Matt Skiba & Co., “Heavy Into” Trevor Kelley still doesn’t know for sure. YEAH YEAH YEAHSThey’re young! They’re hot! And they’re growing up in public under the kind of scrutiny usually reserved for British royalty. New York’s slyest shoot straight from the hype with Jenny Tatone. FINCHImagine: a post-hardcore band who say everything they want to in their music. Could this be a new trend worth endorsing? A.P.’S SUMMER PREVIEW GUIDEWe don’t care what you do with your life (and we mean that in the nicest possible way). But we’ve compiled our extensive list of this season’s most exciting discs, tours, games and movies in the hopes you’ll max out your summer in a number of thrilling ways. It’s cool, you can thank us later…

INCOMING LETTERS NEW RELEASESWe preview upcoming discs from Good Riddance, Shai Hulud, the Mars Volta, Dropkick Murphys, the Locust and Liz Phair; get in-the-studio updates from the Distillers, Rufio and Autopilot Off; and list over 150 new CDs that are set to become the soundtracks to your summer. WIRETAPPINGThe A.P. Poll gets your opinion on drug use; Simple Plan take on the haters; Boy Sets Fire defy government and scene politics; and Marilyn Manson opts for a kindler, gentler form of terror. Plus, the Gossip head up a Movement; Evan Dando grows up all wrong; Ozma give us rock lessons; Iann Robinson gets mad with Puny Human; musicians pick their favorite summer soundtracks; and we find out what happens when bands attack one another, that is. All this and more, as they say in show biz, when you turn to page 23… SCREENINGSFamke Janssen’s career is rated X2; meanwhile, Now Showing raids theaters and DVD racks for the latest in eye candy. LOW PROFILESIdlewild grow up; Pistol Grip blow up; and Rise Against show up those who think punk’s all about the soapbox. Plus nine okay, eight other reasons it’s still okay to ignore radio in the Lowdown. REVIEWSThe A.P. Record store’s grand opening featuring reviews of new CDs from Deftones, Boy Sets Fire, Elliott, the Black Keys, the Gossip, Yo La Tengo and more; glimpses behind the music with In-Store sessions from Powerman 5000 and the Faint; Plus, everything old that’s new again in Reissues, and all the new discs our editors can’t live without in the Listening Station. 10 ESSENTIAL UNESSENTIAL ALBUMSWe dare you to find any other rock magazine in stores this month that’ll say it’s okay to ignore the entire recorded works of Elvis Costello, Patti Smith and Kiss and get you to laugh about it. Thought so.