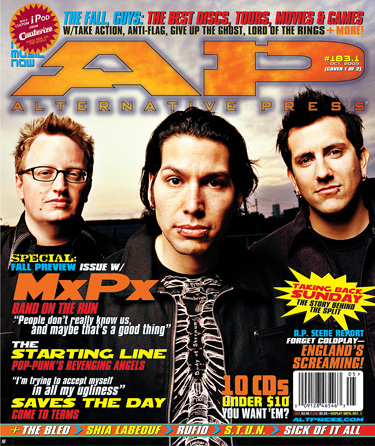 THE STARTING LINE
What do mud pits, internet stalking, knife threats and exhaustion have to do with this nice bunch of suburban Philadelphia boys? Cara Lynn Shultz fires the starter’s pistol.

SAVES THE DAY
For the creation of their new disc, STD have weathered shifts in their ranks, their label, their music and in some cases, personal health. Leslie Simon charts the changes. 96 S.T.U.N. L.A.’s newest art-punk contenders remind you that it’s not “cutting edge” if nobody bleeds.

PRETTY GIRLS MAKE GRAVES
Could it be that the level of great music from Seattle is equal to the number of people in bands with children and jobs in the service sector? Hey, it can happen…

RUFIO
These SoCal punks prove that 80,000 downloaders and the Foo Fighters’ producer can’t be wrong.

Who cares if the weather’s dropped a few degrees, school’s back in session and there’s a new Limp Bizkit disc on the horizon? We’ve busted our butts to find the best fall discs, tours, games, movies and DVDs that will make you live for today, and not reminisce about summer.

NEW RELEASES
We preview the latest from the Dismemberment Plan, the Gossip, the Lawrence Arms, Matmos, Morbid Angel and the Rapture; go In The Studio with Against Me!, the Blood Brothers and the Von Bondies; and list over 100 discs set to drop this fall.

WIRETAPPING
The A.P. Poll asks whether you can really recover from addiction; From Autumn To Ashes decide major-label waters aren’t so warm after all; The Sounds turn to the left in Disclothesure the Vans Warped Tour creates a Punk Rock Holocaust; Green Day’s early classics get the reissue treatment; Taking Back Sunday come back swingin’; Superjoint Ritual give us a contact high; and we learn why England’s Screaming. All that plus pro skaters, couch potaters and old-school innovators.

LOW PROFILES
The Bled learn; Spitalfield turn; and Cauterize burn. Plus, nine more bands you need to know in the Lowdown.

REVIEWS
Step into the A.P. Record Store for the scoop on new releases from Rancid, Saves The Day, Andrew W.K., My Morning Jacket, Arch Enemy, Spiritualized and more; check out In-Store Sessions with Black Rebel Motorcycle Club, Killing Joke and Sick Of It All; plus Reissues, and the sounds that get our editors through crunch time in Listening Station.

10 ESSENTIAL FOR $10
We visited our local used-CD store with a $10 allowance and walked out not only $1 under budget, but 10 albums richer as well. So, why are we giving it all away this month?