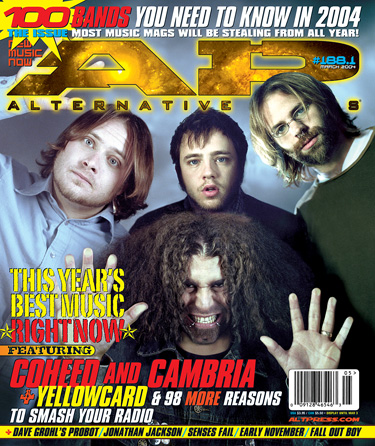 100 BANDS YOU NEED TO KNOW IN 2004
Since current radio deregulation allows corporations to own more radio stations than Jesus, Allah, Buddha and Rupert Murdoch combined, outlets for new music are getting harder and harder to find. Donít abandon hope, because weíve gathered up Coheed And Cambria, Yellowcard, Fall Out Boy, the Early November, Boys Night Out and 95 more bands that are better than the same 40 groups Clear Channel keeps playing over and over.

NEW RELEASES
We preview new CDs from Sugarcult, the Vines, Onelinedrawing, Descendents, 90 Day Men and TV On The Radio; go In The Studio with New Found Glory, Eighteen Visions and theStart; and list over 100 discs youíve gotta have.

REVIEWS
The knowledgeable (and good-looking) staff at the AP Record Store gives you the dirt on new releases from the Get Up Kids, Liars, No Motiv, Madball, Stereolab and more; In-Store Sessions from Dave Grohl and Dennis LyxzÈn; essential reissues, boxed sets and best-ofs in Collectorís Corner; and the 8 CDs keeping our editors (relatively) sane in Listening Station.

BACKGROUND CHECK: UNDERGROUND HIP HOP From Grandmaster Flash to A Tribe Called Quest to Atmosphere, Aesop Rock and beyond, we dig deep into the crates to wax poetic on indie hopís evolution.