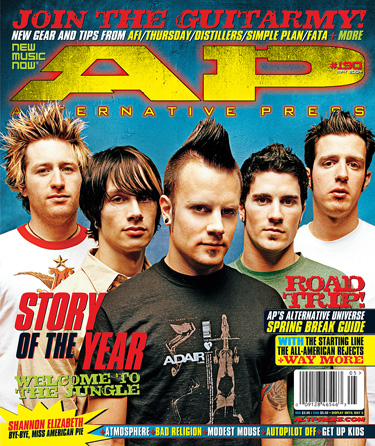 STORY OF THE YEAR
The St. Louis quintet have been making major waves with their diehard fans and the nation’s cred police. Trevor Kelley hops on the fast-track bus with some down-to-earth guys who seemingly just transfered there from another one.

SIX STRINGS, NO WAITING:
It’s National Guitar Month, and we’ve got the goods for you, whether you’re a fan or a seasoned player. In addition to checking out the newest gear, we’ve solicited six-string testimonials from players in AFI, Thursday, the Blood Brothers, the Distillers, Darkest Hour, Simple Plan, Pelican, From Autumn To Ashes and Boys Night Out to learn just what makes their fingers move.

AP’S ALTERNATE-UNIVERSE SPRING BREAK GUIDE
Forget Cancun and Vegas; when your school breaks this spring, hit the road with this mega-guide and its travel tips from our panel of road-trippin’ musicians (including Tsunami Bomb, the Bouncing Souls, Thrice, Avail and Rufio).

THE GET UP KIDS
On their new album, these Kansas City locals are expanding the notions of a genre that thrives on arrested development. Is America ready for the Get Up Men?

NEW RELEASES
We preview new CDs from the Icarus Line, Piebald, Melissa Auf Der Mar, Division Of Laura Lee, Mission Of Burma and the Streets; go In The Studio with Bad Religion, My Chemical Romance and Eisley; and list over 100 discs to make those April showers a little more bearable.

WIRETAPPING
The AP Poll asks if TV is getting too hot; None More Black’s Paul Delaney shows us his parents’ crib; Atmosphere’s Slug dodges the “e” word; Autopilot Off find punk in unexpected places; BMX god Mat Hoffman shows us how to survive a fall; Simple Plan pick a producer-or six; Vans debuts its customizable new kicks; and metalcore’s finest line up to celebrate Guns N’ Roses. Plus games, gear, gossip, and part seven in the yearlong AP History.

SCREENING
Shannon Elizabeth waves goodye to American Pie; Judy Greer is the best friend you never had; Eye Candy taps into its inner dork and gets the skinny on the long-awaited Freaks And Geeks DVD boxed set; Now Showing cuts a rug with the most stunning cinematic partners tangoing into theaters and DVD players.

REVIEWS
Check in at the AP Record Store to get the real deal on the new Bad Religion reissues, as well as reviews of recent releases from Leatherface, Iron & Wine, Slapshot, Franz Ferdinand and Murs; In-Store Sessions from Modest Mouse and Dilated Peoples; essential reissues and best-ofs in Collector’s Corner; and the eight CDs our editors are spinning like they’re going out of style in this month’s Listening Station.