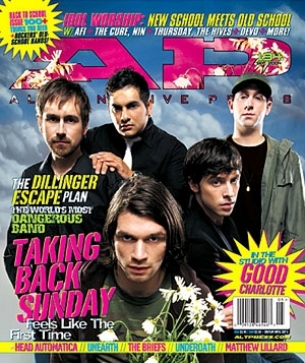 Taking Back Sunday
Forget what you know: TBS are back with a new lineup, a new album and a new energy that will carry them way past their peers. And what about that Police cover, anyway?

EXCLUSIVE! GOOD CHARLOTTE
AP hangs out with Team Madden to get the lowdown on the making of their next album. Find out if they’re feeling the pressure, and take a sneak peek at the possible track listing.

THE DILLINGER ESCAPE PLAN
For the last five years, countless hardcore bands have used Dillinger’s music as a blueprint for their own claims to fame. This time the band have drafted a new Plan, and it’s all on their own terms.

UNEARTH
Another maddening metalcore outfit from Massachusetts is taking things up another couple of notches. What the hell are they eating in that state? Shredded cars?

THE BRIEFS
The biological clock on these Seattle-based punk-rock wiseguys doesn’t go past 1982. But they made it out of the major-label meat grinder with their hearts and minds intact.

SAY ANYTHING
Ask anybody in a band: You can obsess over details in your music, or get so worked up over what people say about you on message boards that you’ll drive yourself crazy. That’s what happened to Max Bemis, and he ended up with an emo masterpiece.

BACK TO SCHOOL
Our editors hand-pick over 100 goodies to make your dorm room rock; plus, some of our favorite rockers-including Simple Plan, New Found Glory, Rise Against, Letter Kills, Tsunami Bomb and Murder By Death-let us in on the dirty little secrets from their old bands’ school days.

IDOL WORSHIP: NEW SCHOOL MEETS OLD SCHOOL
Everybody has heroes, so we figured why not hook up some of our favorite bands with musicians they admire? AFI’s Davey Havok swapped e-mails with Robert Smith of the Cure; Thursday’s Geoff Rickly hit “send” toward Nine Inch Nails majordomo Trent Reznor; The Hives’ top screamer Pelle Almqvist chatted with Mark Mothersbaugh of Devo; Daryl Palumbo of Glassjaw and Head Automatica got on the phone with Squeeze’s Glenn Tilbrook; Brody Dalle of the Distillers paid tribute to Roky Erickson; and Tiger Army, Most Precious Blood, Yellowcard and some other folks weighed in on who they’d wanna hang with.

NEW RELEASES
AP goes In The Studio with Rise Against, Motion City Soundtrack and Matchbook Romance, and Lamb Of God; and previews over 100 new CDs we’ll be selling last year’s textbooks to afford this fall.

WIRETAPPING
The AP Poll goes up for adoption; Underoath, Rogers Sisters and Comets On Fire shake up Low Profiles; Sum 41 get a Cold Call; Matchbook Romance show us how to look good on someone else’s dime; Red Bull and snowboarders rock SLC, punk; Further Seems Forever get a new Sense of direction; and Channels and Walking Concert do post-hardcore their way. All that plus games, gear and the good word from 1995 in the AP History.

SCREENING
Matthew Lillard snakes his way through a creek; Kadee Strickland creeps out over a snake; and we preview what’s hot (and what’s not) at theaters and in DVD players this month.

REVIEWS
The AP Record Store is the only place to get the scoop on brand-spankin’-new releases from the Hives, the Good Life, the Vandals, Neurosis, Battles, the Mooney Suzuki and more; to hear exclusive behind-the-music In-Store Sessions from Hazen St. and Head Automatica; to get your nerd on in Collector’s Corner; take a magic carpet ride in I Don’t Know, Ask That Guy; and see which discs our editors are keeping our editors going (aside from Red Bull, of course) in Listening Station.

10 ESSENTIAL Bob Dylan, OutKast and Moby, emo? They didn’t think so, either, but that’s just what these accidental emo stars gave us when they laid their hearts on their sleeves.