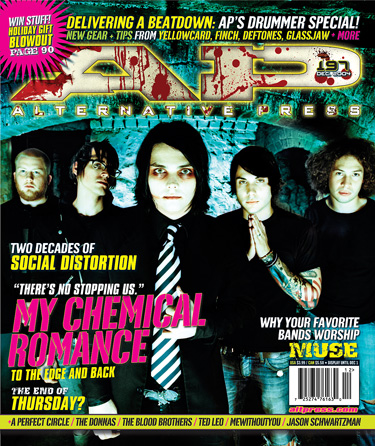 MY CHEMICAL ROMANCE
Comics, coke, cocktails, click tracks and ’core aesthetics made this New Jersey contingent the post-emo powerhouse they are today. But it also nearly dumped them into the abyss. Leslie Simon experiences better rocking through Chemistry.

MUSE
Revered like royalty in their native England, and just getting on the rock radar here in America, this melodic power trio have fans in punk places.

THE DONNAS
Having had it with the scene police and pinheaded radio jocks, the Donnas continue to kick ass, take names, and then throw the list away. Are you ready for the Spite Girls?

THE BLOOD BROTHERS
The avant-core scream team are pushing themselves even further—by taking it down a few notches.

AP’S HOLIDAY GIFT GUIDE
AP’s editors handpick over 100 of the latest, greatest goodies you and yours will be asking for this Christmakuhmanzaamas (how’s that for PC?), and since this season’s all about giving stuff away, we do a little of that, too.

ALL IN GOOD TIME: AP’S ANNUAL DRUM EXTRAVAGANZA
We give a twirl of the sticks and a toss of acknowledgement to the drummers from Thursday, Deftones, Less Than Jake, Finch, Glassjaw, Yellowcard and a few others who keep their feet on the beat. We also check out the new gear that will look good in your practice space this holiday season (hint, hint…).

NEW RELEASES
JamisonParker, Anberlin and Armor For Sleep are In The Studio, and we preview over 100 new CDs just itching to be on your Amazon wishlist.

WIRETAPPING
The AP Poll checks to see if your CDs are covered; Tim McIlrath of Rise Against inspires us in AP Op-Ed; Thrice drummer Riley Breckenridge gives music lessons; mewithoutYou, Roses Are Red and Liars Academy storm our Low Profiles; the Ex have our convictions going gaga; our editors and their musician friends give thanks in this year’s Pilgrims’ Revenge special; and we introduce our new monthly look at record labels that’ve shaped rock history as we know it, starting with Epitaph Records. And if you think that’s a lot, we’re barely into the second page…

SCREENING
Jamie Bell gets sucked into the Undertow; Jason Schwartzman gets existential, hearts Huckabees and saves Latin—er, sort of; Julie Gonzalo spends Christmas With The Kranks; and we preview the cinematic white elephants stomping into theaters and DVD players this month.

REVIEWS
The AP Record Store is the only place you can preview hot new releases from Simple Plan, Sum 41, Flogging Molly, the Donnas, Isis, Recover and Hot Snakes; wax intellectual with Travis Morrison and Lamb Of God in their exclusive In-Store Sessions; plus, learn more than you ever wanted to know about Uriah Heep in I Don’t Know, Ask That Guy; remember Subhumans in the premiere of our old-school punk column, No, Seriously, Ask That Guy; get retro with Collector’s Corner; and hear what’s keeping our editors credible in Listening Station.

10 ESSENTIAL SONGS OF THE DUBYA ERA
While the post-Nov. 2 ballots roll in, we’re looking back at some of the songs that came out of the past four years’ political climate. Yeah, even that Toby Keith single.