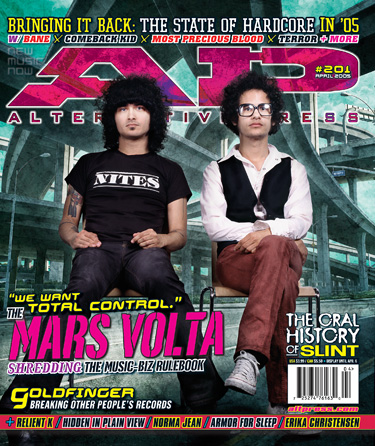 IN THE RAG
IDOL WORSHIP
In our new, ongoing special, we introduce some of your favorite musicians to their old-school heroes; and this month, Rancid and the Bastards honcho Lars Frederiksen realizes his lifelong dream of interviewing Motörhead mainman Lemmy Kilmister.

PHOTO OP
Sure, you could call ’em “posters,” but AP likes to give you a little bit more, as our stories behind these classic-and in some cases never-before-seen-wall-ready shots of Ramones, AFI, Motion City Soundtrack and Taking Back Sunday prove.

BRINGING IT BACK: AP’S HARDCORE SPECIAL
In the last few years, old-school hardcore has experienced a massive resurgence, led by acts like Comeback Kid, Champion, Bane and Terror. In AP’s latest hardcore special, we highlight 15 of the genre’s brightest hopes and check in with HXC lifers to see where the genre’s headed.

THE ORAL HISTORY OF SLINT
They weren’t around for long, and they broke up right after the release of their landmark second album. Now that this massively influential Louisville, Kentucky, band are reuniting for a once-in-a-lifetime tour, AP traces Slint’s roots and branches in this exclusive oral history.

GOLDFINGER
At different points in his 10-year career, Goldfinger frontman John Feldmann has had to put up with Bert McCracken and Johnny Rotten. And he wouldn’t have it any other way.

NORMA JEAN
It looked as though these hardcore heavyweights might have to install a conveyor belt in their practice space to help rotate their share of lead singers. But with a solid lineup and a new album in place, Norma Jean are making up for lost time-in the heaviest way possible.

RELIENT K
God must be a pop-punk fan, as the fortunes of Canton, Ohio’s finest keep getting better-even without the cardboard cell-phone costumes.

OPINION
The AP Poll checks out those ink stains on your skin, while Katy Otto of Del Cielo sounds off in this month’s AP Op-Ed.

NEW RELEASES
We peek in on the All-American Rejects, Bane and Death By Stereo In The Studio, and showcase over 100 new releases that are desperately seeking your affection.

WIRETAPPING
Fearless Records gets profiled; Thrice drummer Riley Breckenridge scares bands straight in his monthly advice column; Atreyu and Darkest Hour let us geek out with them; Travis Barker is our favorite punk-rock family man; Disclothesure presents Cinder Block with a metaphorical cake to celebrate the company’s sweet 16th; and Hidden In Plain View, the Academy Is… and the Plot To Blow Up The Eiffel Tower rock Low Profiles.

SCREENING
Erika Christensen gets angry in The Upside Of Anger; Michelle Trachtenberg gets icy in Ice Princess; Camilla Belle gets, er, rosy in The Battle Of Jack And Rose; Eye Candy tips its Pimp Cup to video director Marc Webb; Now Showing weaves cinematic boondoggle key chains that are must-haves in theaters and DVD players this season.

REVIEWS
The AP Record Store may not stock the song “I Just Called To Say I Love You,” but it is the only place to get exclusive reviews of new albums by Reggie And The Full Effect, Iron & Wine, High On Fire, the Kills, the Decemberists and Moby; In-Store Sessions with Armor For Sleep and LCD Soundsystem; crash courses in Bastro and the Allman Brothers in I Don’t Know, Ask That Guy and No, Seriously, Ask That Guy; essential reissues and rarities in Collector’s Corner; and what’s keeping our staffers motivated (aside from the Medieval torture equipment) in Listening Station.
10 ESSENTIAL PUNK-ROCK CONCEPT ALBUMS For the gazillion of you who’ve been complaining that we haven’t yet celebrated American Idiot in a 10 Essential column, here you go-but seriously, as punk concept album goes, that’s just one-tenth the reason we’re giving it up this month.