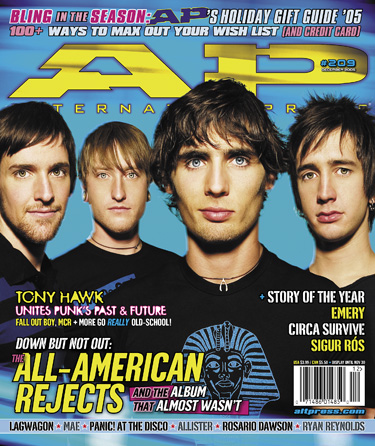 THE ALL-AMERICAN REJECTS
Hands up: Who thought the AARmy would be banished to the People’s Republic Of One-Hit Wonders while frontman Tyson Ritter took over Mark McGrath’s job on Extra!? What if we told you that at some point, the band members were thinking the exact same thing?


THE PILGRIMS’ REVENGE!
Eleven months out of the year, all we do is we moan and complain. Now, in the spirit of Thanksgiving, we acknowledge the things that make our lives grand.

IDOL WORSHIP
Ben Folds explains to Yellowcard’s Ryan Key that it’s alright to wear eyeliner, but only if he wants to.

PHOTO OP
Suitable for framing, these classic shots of the Sex Pistols, Boys Night Out, Fall Out Boy and Blink-182-era Travis Barker will look just as sweet in your locker.

BLING IN THE SEASON: HOLIDAY GIFT GUIDE ’05
AP’s editors handpick over 100 reasons to be greedy-sorry, Santa, we mean “generous”-this season.

WHEN GOOD DOGS DO RAD THINGS: THE DILLINGER ESCAPE PLAN GIGANTOUR DIARY
Our favorite math-metal terrorists don’t just suffer for their art; they report it back to us in gory detail.

MAE
Who would’ve thought that modeling a rock album after a children’s book would impress people? Just ask Mae fans-like the Foo Fighters and Weezer.

EMERY
If you need a band to help break up your post-hardcore monotony, supply fashion tips or run you off a fake I.D. or two, look no further.

STORY OF THE YEAR
Ready to beat down the sophomore slump, the Page Avenue Crew come out swinging with a harder album and an appetite for… well, lunch.

CIRCA SURVIVE
Anthony Green walked out of the screamo sweepstakes, hooked up with some like-minded souls and hasn’t looked back since.

THE JULIANA THEORY
Western Pennsylvania’s finest popsmiths came out the other end of the music-business machine slightly bloody and quite p.o’ed. Just listen to their new record.

SIGUR RÓS
Iceland’s favorite sons have returned with a vengeance. A gentle one, but a vengeance, nonetheless…

LAGWAGON
There must be less tearful ways to kickstart your band, but the death of a close friend brought new life to this SoCal punk institution.

ALLISTER
Use the phrase “cookie cutter” to describe these power-pop practitioners, and you’d better hightail it for the door.

CONSTANTINES
While much of indie rock is comfortable burying its head in ironic fashion, this well-read Canadian delegation are raising the bar for the literary merits of rock ’n’ roll.

OPINION
Andrew Vachss and Fat Wreck Chords PROTECT the world’s children in AP Op-Ed; and the AP Poll probes the minds of everyone from Against Me! to Harvey Danger (and you, of course) about switching from CDs to MP3s. Paranoia, paranoia…

NEW RELEASES/IN THE STUDIO
We preview hot new slabs of plastic from System Of A Down, Bouncing Souls and more; and In The Studio revisits some of our 100 Bands You Need To Know In 2005, in Hawthorne Heights, Matchbook Romance and the Dresden Dolls.

WIRETAPPING
Three One G gets the Label Profile treatment; Panic! At The Disco, Let Go and Nodes Of Ranvier storm Low Profiles; HORSE The Band are first in line for the Nintendo-core Fusion Tour; Head Wound City are the year’s most unlikely supergroup; Face To Face mainman Trever Keith goes over his band’s new retrospective; Hawthorne Heights and the Banner take us behind their scenes; Thrice drummer Riley Breckenridge takes us to (rock) school; and much, much more.

SCREENING
Rosario Dawson sings for her supper in Rent; Ryan Reynolds sheds major poundage in Just Friends; Adam Goldberg goes behind the lens in I Love Your Work; Kristen Stewart repeatedly tries to pronounce Zathura; Eye Candy draws a big heart around Degrassi: The Next Generation; Now Showing scopes out what’s new in theaters and DVD players this season.

REVIEWS
The AP Record Store is the only place in town to get the lowdown on new releases from Thrice, Depeche Mode, Lightning Bolt, Khanate, Broken Social Scene, Matt Pond PA and more; the answers to your burning questions about Milemarker and Turbonegro in our exclusive In-Store Sessions; plus essential reissues and rarities in Collector’s Corner; oh, and find out which AP editor can make it through the new Merzbow collaboration, sanity (relatively) intact.

10 ESSENTIAL ALBUMS YOU CAN’T SING ALONG TO
’Scuse me while I kiss this guy, and while you’re at it, see if you can figure out what these 10 bands have in common-besides mush-mouth syndrome.