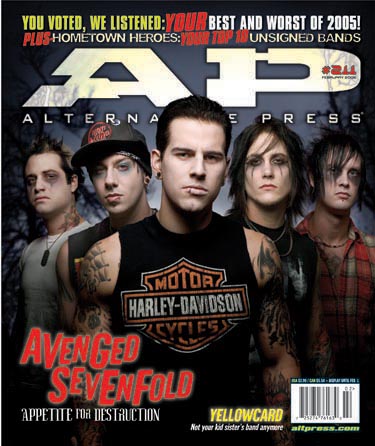 COVER STORY:
AVENGED SEVENFOLD
These O.C. rockers are self-made men, and they’ll rightfully take all the credit-and the blame-for it. D.X. Ferris follows A7X from the back of the tour bus to the front of the strip club, documenting the band’s ascent from Bat Country to TRL along the way.

PHOTO OP
Black Flag, Alkaline Trio, FEAR BEFORE THE MARCH OF FLAMES, and SUGARCULT are represented here in all their blinding iridescence. Avert your eyes, slightly.

THE ORAL HISTORY OF ROCKET FROM THE CRYPT
Back when “alternative rock” was sweeping the planet, this influential San Diego unit brought a mutant hybrid of punk and soul to crowds looking to escape the grunge malaise. John Pecorelli talks to people in and around Rocket From The Crypt.

A THIN LINE BETWEEN LOVE AND HATE: THE 2005 READERS POLL AWARDS
You spoke; we tallied; and these are your best and worst picks from the past year. Note: If you’re not into Fall Out Boy, you might want to skip ahead a few pages.

HOMETOWN HEROES: READERS PICK TOMORROW’S BANDS TODAY
Here, as chosen by AP’s readers, are the 10 brightest unsigned bands on Earth-and if you’re one of the tens of thousands who voted, may we suggest a career in A&R?

YELLOWCARD
In a few short years, these platinum pop-punks have gone from Warped Tour to Radio Disney. Could the next stop be Behind The Music?

BLEEDING THROUGH
The furious O.C. unit want to beat “The Curse,” and not a dead horse-that’s why they’re leaving metalcore behind.

OPINION
The Unseen’s Tripp issues a wakeup call in AP Op-Ed; and the AP Poll checks in with everyone from Kaddisfly to the Adolescents (and, of course, you) to see if bands should be hitting up their fans for extra scratch.

NEW RELEASES/IN THE STUDIO
We preview new discs from Matchbook Romance, Action Action and more, and spy on New Found Glory, NOFX and Less Than Jake while they’re In The Studio.

WIRETAPPING
Label Profile scopes out A7X’s old digs at Hopeless Records; Disclothesure proves that our choice in shoes isn’t that irregular; we get the Lowdown on Morningwood, Blacklisted, Portugal. The Man and eight other bands you should be checking out; and we look back fondly on our rockin’ weekend at Chicago’s Flower15 party. All that plus music lessons, lyrical insight and a peek into your favorite musicians’ road cases.

REVIEWS
Metaphorically speaking, the AP Record Store is the only place you can get the real deal on new releases from Yellowcard, the Briefs, the Darkness, Tristeza, Hella and more; In-Store Sessions with Jenny Lewis and Rx Bandits; plus, essential reissues and rarities in Collector’s Corner; your monthly punk- and classic-rock history lessons in I Don’t Know, Ask That Guy and No, Seriously, Ask That Guy; and the truth about which AP staff member unironically listens to Ashlee Simpson in Listening Station.

10 ESSENTIAL ALBUMS OF 2005
While our editors generally can’t agree on anything, this roundup of our favorite albums from ’05 is probably the closest we’re ever gonna come to a musical consensus.