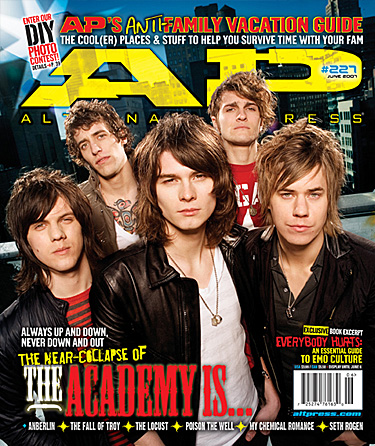 COVER STORY
THE ACADEMY IS…
Despite a faithful fanbase and an admirable work ethic, these Chicago post-emo rockers were lost in a black cloud of their own making. But with an ambitious new album and a bright outlook, The Academy Is… have shook off the ghosts to get on with it.

SPECIALS >>>
EXCLUSIVE! EVERYBODY HURTS EXCERPT
Attention All Emo-Haters: AP managing editor Leslie Simon and Trevor Kelley are throwing the book at you. Not surprisingly, it’s their book, Everybody Hurts, the be-all/end-all guide to the much-maligned subculture of emo. It’s got sass, wisdom, style and finesse-which is everything you won’t find on Good Charlotte’s new disc.

SPECIAL!
THINGS TO DO IN SUMMER WHEN YOU’RE DEAD… BORED! AP’S ANTI-SUMMER PREVIEW
Family vacations are slightly better than, oh, going to the dentist to get six teeth filled. This year, we found the top vacation sites in America and found out the where the real cool stuff was, from cool eateries to all-ages clubs. In addition, we’ve dug up suggestions on everything from weird vacation destinations and how to get to them, to everything you need to rock the summer-games, movies and discs-without leaving your couch.

SUMMER PRODUCT GUIDE
Everyone likes to get new stuff, but everyone loves to get rad new stuff. Here are our picks for the raddest gear you can’t-and shouldn’t-live without this summer.

FEATURES >>>
ANBERLIN
It seems as though these Florida-based modern-rockers have outperformed their own expectations. Singer Stephen Christian and Co. are navigating the growing pains as best as they can.

THE FALL OF TROY
Seattle’s finest math-core maniacs aren’t afraid of success and aren’t sick of each other. Now stop posting smack and start banging your head.

THE LOCUST
The San Diego-based electro-grind unit don’t want you to accept them; they’d rather you faced your own shortcomings, instead.

POISON THE WELL
After riding high in the underground for years, this underground metal unit almost landed into the Whatever Happened To… books. These days, PTW have a new label, but their same outlook remains intact.

OPINION
OTEP siren Otep Shamaya discourages complacency in dealing with Darfur in Op-Ed; and everyone from Fall Out Boy to Senses Fail (and you, of course) tell us if endorsing a major product makes you a sellout in the AP Poll.

NEW RELEASES/IN THE STUDIO
We preview albums from Strung Out, Straylight Run and more; and In The Studio spies on Minus The Bear, Silverstein and MxPx.

WIRETAPPING
Our AP: DIY section is an exclusive guide for budding musicians, complete with even more exclusive pointers from rockers who’ve been around the block. This month, we get up close and personal with members of My Chemical Romance, the Matches, Hit The Lights, Bullet For My Valentine and Bayside, as well as the techs and other experts who keep ’em in shape, musically and otherwise. AP&R introduces you to four unsigned acts you should know; Chalkboard Confessional talks inspiration with J. Robbins of Channels; Metal Blade Records gets the Label Profile treatment; and Fuse VJ Steven Smith tells us how the South By Southwest was won in his AP-exclusive Untitled Rock Column.

SCREENING
Welcome to our newly revamped Screening section. Please turn off all cell phones. Keep talking to a minimum, as not to disturb your fellow readers. Also, be sure to throw away all garbage in the receptacles provided. Now, sit back and enjoy our feature presentation which includes some quality face time with The Whitest Kids U’Know, Daniel Gillies, Seth Rogen and the rest of what’s new and hot in theaters and DVD players this month.

REVIEWS
Ask not what The AP Record Store can do for you; ask what you can do for the AP Record Store. For starters, read our new reviews on Circa Survive, the Used, Job For A Cowboy, Nine Inch Nails, Battles, Dntel, J Church, Megadeth, Wilco, Travis and more; support our In-Store Sessions with Mad Caddies, Funeral For A Friend, the Nightwatchman, Joseph Arthur And The Lonely Astronauts and Sage Francis; attend fundraising dinners for Ian Hunter and Threats in our classic-rock and classic-punk columns; and vote to pass Playlist, Collector’s Corner and Listening Station into law. Rock law.

10 ESSENTIAL songs under 30 seconds
Remember how playlist for our 10 Essential Songs Over 10 Minutes the other month was over two hours long? Yeah, this one’s not even three-and-a-half minutes. It’ll take you longer to read this month’s installment than to listen to it-so hop on the toilet and get going!