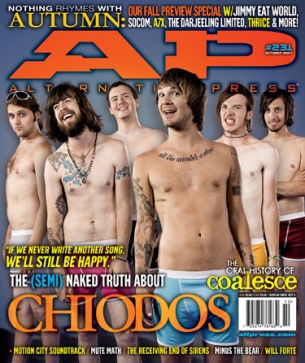 COVER STORY: CHIODOS
Given their personalities, it’s hard to believe the members of Chiodos would ever hang together in a room without musical gear. But with the arrival of an ambitious new album that finds the band at the top of their game, the old line about the sum of the parts has never been more appropriate.

NOTHING RHYMES WITH AUTUMN: AP’S FALL PREVIEW
Sometimes the act of getting something as trivial as a release date for a frickin’ CD is as arduous as deprogramming people who bought Good Morning Revival. Nonetheless, we strived to find all the stuff that will make you curl your toes in anticipation. No problem: Come up to us at a show and thank us then.

THE ORAL HISTORY OF COALESCE
This influential ’90s Midwest hardcore unit left a scar on the American underground with a psychic Molotov cocktail of noise, power, vitriol and the sound of things falling apart. Having reconvened to make music, we expect grate things from them. So should you.

MOTION CITY SOUNDTRACK
MCS are still developing the subplots that have been with them since Commit This To Memory, and they’re releasing their next pop-punk score, even if it kills them.

MUTE MATH
This spirited atmospheric electro-band have some basic ethics they passionately adhere to. They’re just not the ones you’ve heard about on the ’net…

THE RECEIVING END OF SIRENS
The men of TREOS lost track of both themselves and their art. So they cleaned house, looked to the stars and got down on the farm to retrieve their muse. And no, it wasn’t a cuddly mule, either…

MINUS THE BEAR
This forward-thinking Seattle unit don’t plan on selling out anytime soon, but they’re not buying into that “starving artist” crap, either.

OPINION
Brad Warner, author of Sit Down And Shut Up, sheds some like on the punk and Buddhism connection in Op-Ed; and everyone from Paramore to Sparta (and you, of course) tell us if they feel guilty when illegally downloading music in the AP Poll.

NEW RELEASES/IN THE STUDIO
We preview albums from Matt Pond PA, Ministry and more; and In The Studio checks up on Lostprophets, Offspring and Amanda Palmer.

WIRETAPPING
There’s a lot of steps to take from basement shows to headlining Warped Tour, and our AP: DIY section is here to guide you along the way. Check it out this month to find tips, tricks and traps to avoid from members of the Fall Of Troy, the Starting Line, the Chariot, Rise Against and Smoke Or Fire along with the techs and other experts who keep ’em running smoothly. AP&R continues to expose the talent of tomorrow; Chalkboard Confessional gets inside the head of Casey Crescenzo of the Dear Hunter; Asian Man Records gets taken on in Label Profile; and Fuse VJ Steven runs down his fave SURS moments in his AP-exclusive Untitled Rock Column.

AP RECOMMENDS
If you’re not already listening to Schoolyard Heroes, As Cities Burn and Holy Roman Empire, we won’t tell. But, while no one’s looking, you better load ’em up on your iPod, STAT!

AP STYLE
Welcome to our spankin’ new AP Style section. Here, we’d love to introduce you to some of the hottest gear burning up our closets. This month, get to know Skelanimals and a ton of rad white graphic tees. Plus, we realize that looking good isn’t just about your duds; it’s also about your ’do… And your makeup… And your nails… You get the picture.

SCREENING
Please turn off all cell phones. Keep talking to a minimum, as not to disturb your fellow readers. Also, be sure to throw away all garbage in the receptacles provided. Now, sit back and enjoy our feature presentation, which includes some quality face time with James Wan, Will Forte, Taylor Momsen and the rest of what’s new and hot in theaters and DVD players this month.

REVIEWS
The AP Record Store is getting started on spring cleaning a few seasons early, so swing by and check out our fall dusting sale with new releases from Every Time I Die, All Time Low, As I Lay Dying, Hot Hot Heat, Pinback, Jamie T, Aiden, HORSE The Band, Mae, the Good Life and more; our In-Store Sessions never cease to amaze, with Dropkick Murphys, Between The Buried And Me, Qui, Animal Collective and Aesop Rock dropping by; Lynyrd Skynyrd and the Ruts get thrown into the cut-out bin and the store stereo in our classic-rock and classic-punk columns; and just because we love you, we’ll throw in End Cap, Playlist, Collector’s Corner and Listening Station free with purchase.

10 ESSENTIAL INDIE-ROCK RUNNING ALBUMS
Our copy editor Rachel Lux ran the Cleveland Marathon earlier this year but did it sans iPod; so we turned to Luke O’Neil, who’s probably seen the Boston Marathon out of his window once or twice, to tell us what the best soundtrack for punishing your body is. Make sure to double-knot those laces!