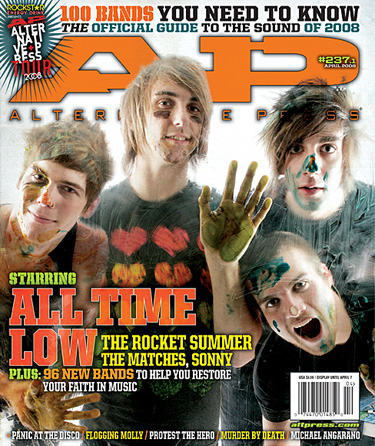 All Time Low The Matches The Rocket Summer Panic! At The Disco Murder By Death Protest The Hero Sonny Flogging Molly

8TH ANNUAL 100 BANDS YOU NEED TO KNOW
Discussions were had; MySpace was frequently visited; dirty looks were thrown; knives were drawn. Just business as usual among the AP editors to determine who was going to get real estate in this issue’s guide to the new year’s noise. Fire up your web browser, and turn it up already…

ALL TIME LOW
Maryland’s entry in the pop-punk sweepstakes have come to testify that like Blink-182 before them, life is one glorious poop joke. No worries, because there’s a legion of fans who think ATL are indeed, the shit.

THE MATCHES
NorCal’s best-dressed hyphenate-rockers aren’t looking to buy mansions, designer drugs or the services of Pamela Anderson. Being able to realize the universe inside their collective head is more than enough

THE ROCKET SUMMER
Bryce Avary has no problem helping your grandma cross the interstate, but he’d rather steer clear of anything that keeps him away from music-whether it’s his or anyone else’s.

SONNY
When Sonny Moore let the door hit his ass on the way out of From First To Last, he realized that a whole world of artistic possibilities awaited him. Whether you’re along for the ride makes no difference to him.

OPINION
Sinister Muse Records president Christian Picciolini warns of the dangers of hate mentality in Op-Ed; and everyone from Alexisonfire to From First To Last (and you, of course) tell us if it’s difficult for fans to gain scene credibility in the AP Poll.

NEW RELEASES
We preview albums from Meshuggah, the Hush Sound and more; and In The Studio checks up on Cute Is What We Aim For, H2O and Gym Class Heroes.

WIRETAPPING
There’s no official textbook on becoming a rock star, but our AP: DIY section is recognized in 49 states as a suitable cheat sheet (we’ll convince you yet, Iowa!). This month we’ve got tips, tricks and traps to avoid from members of Protest The Hero, Chiodos, the Forecast and the Fall of Troy, along with the techs and other experts who keep ’em running smoothly. Chalkboard Confessional talks inspiration with Pierre Bouvier of Simple Plan; Sparrow Guitars gets the Company Profile treatment; and Fuse VJ Steven discusses the difference between “good” and “great” in his AP-exclusive Untitled Rock Column.

AP STYLE
Allow us to introduce you to some of the hottest gear burning up our closets. This month, get to know KidRobot and a ton of effing awesome hoodies.

SCREENING
Please turn off all cell phones. Keep talking to a minimum, as not to disturb your fellow readers. Also, be sure to throw away all garbage in the receptacles provided. Now, sit back and enjoy our feature presentation, which includes some quality face time with Michael Angarano, Lindsay Sloane and the rest of what’s new and hot in theaters and DVD players this month.

REVIEWS
Beware the Ides of March! The AP Record Store will protect you from any aural backstabbings by covering new albums from Panic At The Disco, Bury Your Dead, Able Baker Fox, Bauhaus, the Mountain Goats, Pegasuses-XL, Vampire Weekend, Dead To Fall, Be Your Own Pet, Dr. Manhattan and more; our In-Store Sessions with Flogging Molly, Murder By Death and Kingdom Of Sorrow shouldn’t betray you any time soon; our classic-rock and classic-punk columns on Styx and Leatherface hopefully won’t stick the knife in deeper; et tu Playlist, Collector’s Corner, Readers Chart and Listening Station?

10 ESSENTIAL PUNK-ROCK GUITAR SOLOS
While punk is the antithesis of over-the-top stadium rock in almost every category (we wish Derrick Frost from Chiodos had been in a rotating drum set on their tour with Linkin Park), one place the genre has truly held its own is in the power of the shred. Ed Masley digs through his crates of LPs to pull out some of the most memorable melodies of the genre-and even a few that pre-date it.