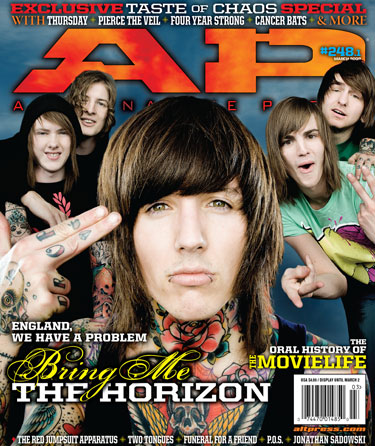 TASTE OF CHAOS
The tour known by many as “Winter Warped” is celebrating its fifth anniversary by digging up the underground and stripping things down. PIERCE THE VEIL, FOUR YEAR STRONG and CANCER BATS have come to kick your butt (in a good way, mind you) while Chaos commander Kevin Lyman tells AP why he’s excited for this year’s campaign.

BRING ME THE HORIZON
Sure, they have a shirt that reads, MENS’ MUSIC, GIRLS’ HAIRCUTS, but there’s so much more going on with these high-powered British upstarts.

THURSDAY
This year’s TOC headliners might be considered “old school” by many, but their new music is as forward-thinking as ever.

THE ORAL HISTORY OF THE MOVIELIFE
This seminal Long Island quintet offered melodies you can mosh to, influencing more than a few bands along the way. This is their story.

AP:DIY
Featuring advice and inside information from THE COLOR FRED, FUNERAL FOR A FRIEND, MAYLENE AND THE SONS OF DISASTER and more.

AP RECOMMENDS
THE LIFE AND TIMES, AUDRYE SESSIONS, THE SLEEPING plus four more.