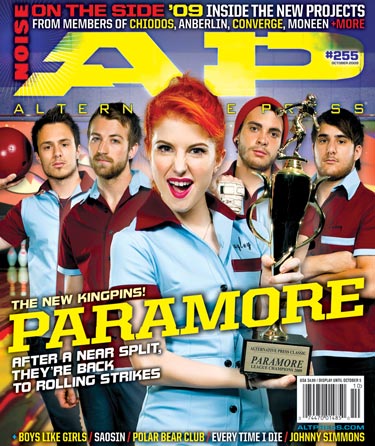 PARAMORE
The last few years in Paramore’s world were spent hard at work on the road, in the studio and under the microscope of fans and critics. With a stellar new album and a tight live show, the only thing they need to work on now is their friendship.

FEATURES >>>
BOYS LIKE GIRLS
Given their singer’s perfectionist tendencies, the banner wrapped around BLG’s coat of arms should read, “We will push no pop before its time.” (Can anyone write that in Latin?)

SAOSIN
While making their latest album, the SoCal quintet learned in no uncertain terms that what doesn’t kill you does indeed make you rock harder.

SPECIALS >>>
NOISE ON THE SIDE 2009
Our annual nod to the sonic extracurricular activities of your favorite bands includes the rockin’ seven-piston engine known as ISLES AND GLACIERS, and the plaintive honesty of ANCHOR & BRAILLE, as well as a rundown of projects from members of CONVERGE, VAMPIRE WEEKEND, RA RA RIOT, MONEEN, STORY OF THE YEAR, THE CHARIOT and ALEXISONFIRE.