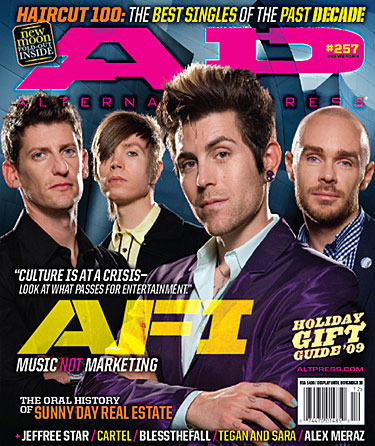 FEATURES >>>
CARTEL
Cartel are back in action with a new album on a new label, so we recruited All Time Low joker Alex Gaskarth to get us the lowdown.

JEFFREE STAR
The internet's first fierce 'n' fab superstar is loved equally by old-school punks and straight kids from the suburbs. You got a problem with that, bitches?

SPECIALS >>>
BEST BUYING: AP'S 2009 HOLIDAY GIFT GUIDE
Feeling a cash crunch? We've got you covered with loads of great holiday swag that has a lot of bang for only a little buck.

HAIRCUT 100: COUNTING DOWN A DECADE OF THE SCENE'S BEST SINGLES
As the '00s draw to a close, we thought it would be wise to look back on the past decade of rock and–with the help of some friends–assemble the best playlist the scene's ever seen. Read on to see which one of your favorite songs we omitted!

AP:DIY
Featuring advice and inside information from EYES SET TO KILL, A SKYLIT DRIVE and more.

REVIEWS
THE AP RECORD STORE is giving major thanks this month for new releases from THE ALMOST, TEGAN AND SARA, DEAD TO ME, ATREYU, FLYLEAF, JOHN NOLAN, BETWEEN THE BURIED AND ME, EVERY AVENUE, THE FLAMING LIPS, BUILT TO SPILL, PELICAN, SLAYER, THE SWELL SEASON and more.

FALL BALL 2009
AP's very first fall tour wraps up this month, but that doesn't mean the dance is over. Relive your memories with the Academy Is…, Mayday Parade, Set Your Goals, the Secret Handshake and You Me At Six with exclusive photos, video and more at ALTPRESS.COM/THEAPTOUR. (Make sure to follow us on Twitter, too: @theaptour)

EXTRA! EXTRA! EXTRA!
Don't forget to swing by ALTPRESS.COM/FEATURES to check out additional content for the stories in this issue, plus loads of other exclusive interviews, slide shows and streaming music.