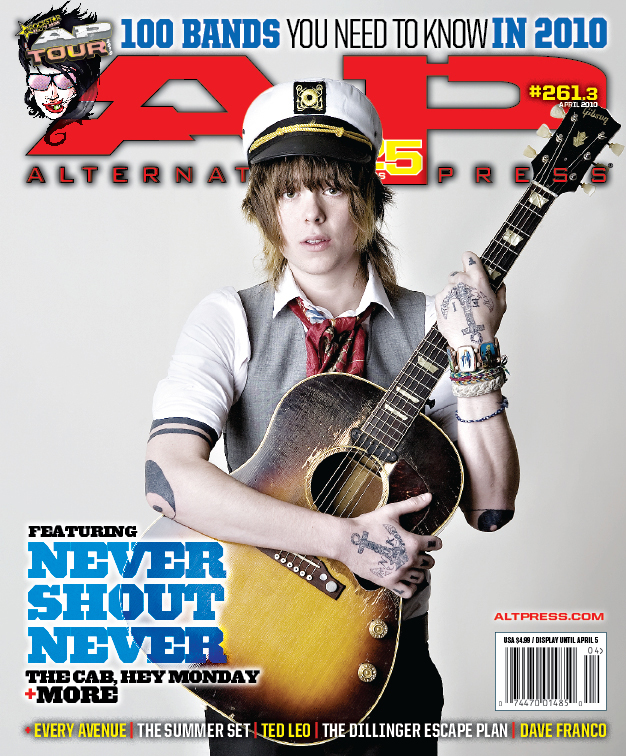 100 BANDS YOU NEED TO KNOW
After many late nights, lively debates, lunging editor-vs.-editor attacks and a handful of emergency room visits later, installment No. 10 of our annual guide to the new noise is finally here. Whether it's guitars and growling or synths and screaming, there's something for everyone, no matter what your taste. (Unless you hate music entirely-then you're probably sitting on the couch in your overpriced Nickelback tour shirt watching ESPN…)

THE CAB
The delegation from Las Vegas could not care about “the scene” or being “punk.” But wanting to steal Justin Timberlake's money? Now you're talking…

HEY MONDAY
Cassadee Pope jumped from high school dead-end to the eight-lane pop-rock superhighway in scant short years. What have you done lately?

NEVER SHOUT NEVER
Never Shout Never CEO Christofer Drew won't be happy until every last one of you hatin' d-bags comes around to his nightly mirth-day parties.

COLLECT 'EM ALL!
It's called a “set” for a reason, and you just won't have a complete one unless you pick up all three covers for this year's 100 Bands You Need To Know edition of AP. Why are you still sitting there? Time to bust out those scavenger hunt skills…

AP:DIY
Featuring advice and inside information from ANTI-FLAG, SHERWOOD and more.

REVIEWS
The snow is finally thawing, which means THE AP RECORD STORE is prepping for spring with new jams from FOUR YEAR STRONG, THE DILLINGER ESCAPE PLAN, TED LEO AND THE PHARMACISTS, THE AUDITION, THE BLED, SHE & HIM, ARTIST VS POET, JAGUAR LOVE, ALOHA, BROKEN BELLS, LIARS, BLACK REBEL MOTORCYCLE CLUB, JONSI and more.