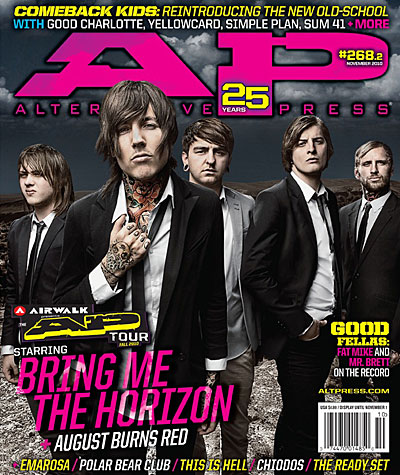 THE AP TOUR FALL 2010
Bring your buds, your boots and some earplugs, because the lineup for AP’s second annual fall tour is all about bludgeoning you into submission. Get your tickets now, and don’t worry; we’ll keep the fight on for you…

EMAROSA
Next time you hit a thrift-store, see if you can get Jonny Craig a shirt that reads “MY WAY OR THE HIGHWAY.”

POLAR BEAR CLUB
PBC came to rock, but be aware they’re not going to chase after you to listen.

THIS IS HELL
These hardcore hellions are killers onstage, but nerds at heart.

AUGUST BURNS RED
ABR bring new resonance to the term “the power and the glory,” both spiritually and sonically.

BRING ME THE HORIZON
What doesn’t kill you makes you stronger—or maybe just a member of Great Britain’s most furious deathcore outfit.

FEATURES >>>
GOOD FELLAS: FAT MIKE & MR. BRETT
Bad Religion and NOFX are celebrating 30th anniversaries this year, so we figured we’d blow the breeze with two of the biggest icons in the history of contemporary punk rock.

SPECIALS >>>
THE AP GUIDE TO DUBSTEP
It’s the pulsating new noise from the United Kingdom that’s got your favorite bands movin’ and groovin’. AP traces the roots of dubstep through the eyes of the scene’s key players, as well as the big fans from this side of the ocean singing the sound’s praises.

COMEBACK KIDS
Members of GOOD CHARLOTTE, HAWTHORNE HEIGHTS, SUM-41, YELLOWCARD and SIMPLE PLAN weigh in on the skills needed to survive as a long-running band today.

AP:DIY
Featuring advice and inside information from NEW FOUND GLORY, THE READY SET, CIRCA SURVIVE and more.

REVIEWS
Trick or treat, AP Record Store-style, with new releases from CHIODOS, BAD BOOKS, TIM KASHER, SENSES FAIL, THE GAY BLADES, NONE MORE BLACK, ALL THAT remains, envy, madball, motionless in white, the gamits, make do and mend, the arrivals and more.

FIND IT AT ALTPRESS.COM
Don’t forget to swing by ALTPRESS.COM/FEATURES to check out additional content for the stories in this issue, plus loads of other exclusive interviews, photo galleries and streaming music.