I'm back again with part 2 of my 17 part series entitled "Brendan Takes Pictures Of Things & Makes Up Captions/Stories To Make It Seem More Interesting Than It Actually May Or May Not Be"©. I'm still working on the title. Let me know what you think of it.

Anyway, this tour is going really well. We're having a blast and the shows have been mostly sold out. All of the show-goers are really cool and we are developing band crushes/romances with all of the bands on the tour. Here are some of the photos that I've taken of the past week:

On the drive to Florida on our day off we walked into our hotel room and realized it was the size of a football field. Wapner did a cartwheel and ended up on the floor (on the right). He laid there forever just cracking up. It's amazing what a large hotel room will do for morale.

Dan rocked so hard in Jacksonville and he was so pumped up that he bit his cymbal after the show and this crack showed up. He is working on his temper. (as a side note, he said the bronze tasted really delicious)

Dan also had a really wacky idea to play the drums from the front of the set. He did this for about 3 shows but it just tired him out too much.

We also played a few shows with our guitar pedals upside down (strapped to the ceiling) it was super hard to change from clean to distortion, so we stopped. The shows for those few nights were pretty intense though. Check 'em out on YouTube© if you get a chance.

This dog was really scary. As you can tell from the picture, George was peering around a corner to try and sneak past him. This weirdest thing was that he had a custom bark installed and it played the Mexican Hat Dance instead of a bark.

Here is our secret weapon! This little dude packs a mean punch. Shane plays this in 2 of our songs on stage and it makes a sound like a motorcycle going from 0-60.

Because of the tragedy going on in Japan we decided to auction off our test presses for our vinyl. We auctioned off 2 of them and they both went for 150 dollars and we're stoked to send that money to help the people of Japan.

In Atlanta we played the same venue as some of our friends. Playing upstairs was Norma Jean, Of Legends, Stick To Your Guns and Impending Doom. Here's a picture I took of our friend Luis trying to get some gum off the ceiling during their set. Someone in the crowd pointed it out and it was bothering him so much that he decided to stop the show and try and get it. The bass player was just chilling with the bass behind his head while this went on. It took FOREVER, but he finally got it and the show went off without a hitch after that!

Here's a shot of Norma Jean playing. They were crazy and they sounded so good. The weird thing was that they thought it was a football game and they thought the crowd was the coach of the game. At one point they threw an entire cooler of Gatorade© on them!

As you can see, down at our show, it was a lot greener. This hobbit was at the show and I could only get a shot of him from the back, but it was pretty wild.

Here's Nick Santino getting engulfed by the crowd. I told you I'd find out some more facts about him so here it is: he loves the movie "Jennifer's Body". He has been taking some online cinematography courses online and did his thesis on that movie. More to come, stay tuned!

Dallas. Hanging out backstage. (L to R) JB (looking at www.thehighcourt.com), Adam (smiling real weird), Dan (editing his film adaptation of R.L. Stine presents "Goosebumps©: It Came From Beneath The Sink II"). Wait till you see this flick, you'll be roped right in... hook, line and stinker.

Here's his impression of the main character from the movie "Edud Yracs" (scary dude backwards). Just thinking about this movie gives me the heebie-jeebies.

Shane had this crazy idea that he had lost his Ozzie Smith rookie baseball card inside the tuning peg of the guitar. Here's a shot of him looking for it. He ended up finding it but wasn't in there... it was in the wheel of his favorite Tech Deck© Skateboard. They keep making these things smaller and smaller these days!

Here's what we record all of our songs on and play all of our intros out of. It gives you that real "this-thing-doesn't-work-at-all" kind of feel.

George and Mike form Anarbor went to a warehouse in Dallas just to hang out. They were all like "Hanging out at the venue is SO not chill, bro. Let's go to a warehouse!"

Greg from Anarbor got this tattoo in Dallas. It contains the Arizona state flag (for his love of his home state), an anchor (for his love of Justin from A Rocket To the Moon's anchor necklace), cactae (for his love of getting poked with needles), and the quote "Home is where the heart is" (from his favorite Lady Antebellum song of the same name, but they misspelled it).

The Artist Vs. Poet guys showed up and they all had bunny ears on. Apparently they are trying to promote their new album that's called "No Bunny's Business". We were all just a little bit confused. 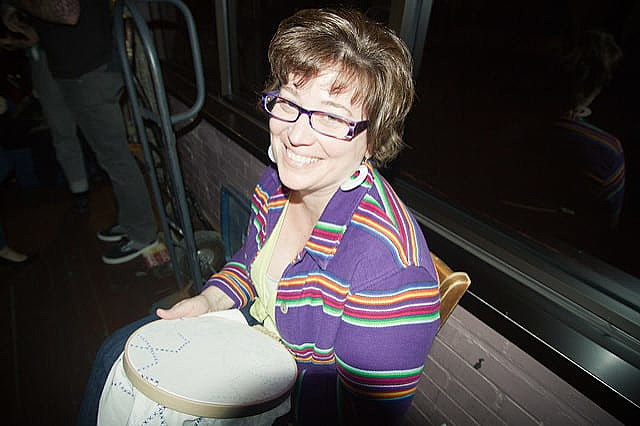 In between mosh pitting and crowd surfing, this lady was doing some fine stitch work. She said her name was Betsy Ross and she was trying to make a flag that would represent our nation for the number of counties (3,141) there are and in the colors Red White and Blue. I didn't have the heart to tell her how many things wrong with that there were since she had already stitched 3,138 stars.

Alex from Go Radio had never seen a camera before.

Travis doing his best "I'm tired but trying to feign excitement" impression. He's so good at that!

Most of Anarbor was looking at Isanyoneup.com on Greg's iPhone©. Mike doesn't get down with that kind of stuff....

There he is. He had his eyes closed the whole time just mumbling about how they were being sinful.

Before the show in San Antonio, George© went to do a Band Vs. Food Challenge at Chunky's© and eat a Four Horsemen Burger©. This burger contains 4 Ghost Chili's, Jalapenos, Seranno Chili, Habanero Sauce and Pepper Jack Cheese. It is, without a doubt, the hottest hamburger in the world. 4,000 people have tried it and only 300 have completed it, which is less than 10%. The video footage will be up soon, I won't tell you whether he finished it or not, but I'll tell you that it's going to be the best episode yet and George had some pretty insane hallucinations after entering the 4th dimension post-burger.

Here's a shot of him after 4 bites, gulping down milk.

Another milk shot (5 bites in). Note the loathing stare past the glass at the burger he is casting.

This is a show of Dan's kick drum pedal that he absolutely destroyed. This thing was developed by NASA but even his iron fist of a kick was no match for this thing.

Here's a shot of Quinn after he tried a ghost chili. You can't see it that clearly here but he was literally bawling his eyes out. As the Wu-Tang Clan always say: "ghost face chili peppers ain't nothing to f*** wit'."

Here's a photo of me and Mike from Anarbor. I was really mad because he fell asleep mid-photo.

After San Antonio, we had a day off and a super long drive. We had to drive to Tucson, AZ which is a total of 30,456 miles. George Volunteered to take shifts 1-8 because he was really excited about this new app on his phone where he can just read Twitter© and it powers the van and drives and steers it. Here's a photo of him in action. The only problem is if he doesn't get enough @ replies per hour, the van crashes and we all die. So keep sending him messages for safety's sake: http://www.twitter.com/georgevalencia

For a short while on the drive we drove through the ice planet Hoth as a shortcut. Here's a photo I snuck in even though the Rebel Alliance was pretty strict on their "no camera" policy. I hope they don't see this.

Dessert wall. That's right: Dessert. The whole thing is made of cheese cake.

We finally made it to Arizona!!!! But they changed their name to Ozona[pronounced: uh-zoh-nuh

]... it's much easier to say and people are super lazy in Arizona... I mean Ozona.

I forgot to mention that Wapner just did this dance the entire drive. It was super distracting, to say the least.