This is Quinn. He's the merch guy for Runner Runner and editor-in-chief for Cigar Aficionado magazine. A few weeks ago he broke his foot while climbing over high fences and he's been in a wheel chair ever since. He loves it and has claimed that he is the 'king' as he wrote on the back of his chair.

Here's Wapner doing some "work". He hasn't slept more than 1 hour on this tour. Mostly he has been searching for his e-baseball card collection. He buys so many e-baseball cards and he thought he lost his Nolan Ryan rookie e-card. Turns out, the whole time they were just in his e-pog folder on his desktop. Rookie mistake... what a dummy!

We played The Chain Reaction in Anaheim, Ca. It is one of our favorite venues to play. Shows are always insane and we have a great time! We were in store for a great night.

For this caption I will take a quite from a wise man named Ryan Ogren: "You guys know what this is? This is an acoustic guitar. Say it with me... ACOUSTIC. GUITAR." 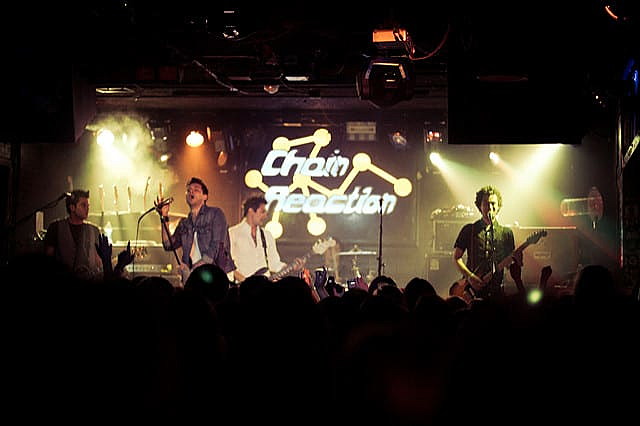 Here's Runner Runner at the Chain Reaction. This was one of the best shows of the tour. Their bass player Jon forgot that he was in a new band and played a while set of Rufio songs underneath. It was awesome!

Here's Anarbor. They did a SICK cover of Train's "Meet Virginia". It is Slade's favorite song because of the lyric "She smokes a pack a day. Wait, that's me, but anyway." Because he always has a hard time remember if he smokes 20 cigarettes everyday or if it's some girl that he's dating. It's a lyric he can really identify with, but then again... we all can.

A.C. Slader of Anarbor catching his breath after a gnarly mosh pit during their Train cover.

Days off usually consist of learning Puddle Of Mudd's entire dicography, but this one was different! This one consisted of eating hundreds of pounds of Mexican food and playing ping pong at our friend Carlos' house.

Carlos was carried out by his servants in his chaise lounge and remained there to view ping pong tournament. He thought this was a match to the death and he was very amused as you can see (he's in the back, smiling in his king-like manor)

Runner Runner's tour manager decided it was a good idea to moon the fans of Rocket To The Moon. He was under the impression (from their name) that that's sort of what they were all about. Needless to say, he was arrested promptly and we haven't seen him since.

Here's a photo that I took of Justin from A Rocket To The Moon on the first day of tour and I finally got around to framing it!

On our day off in Chico, CA we had an awesome barbecue and hang session at Justin's house. 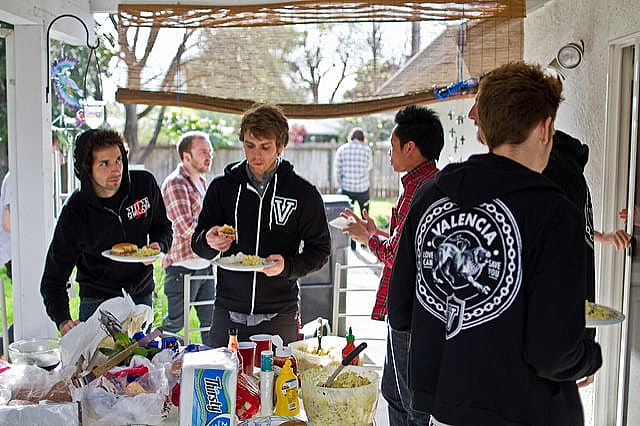 Tyler (the drum tech from Runner Runner, on the left) was pissed that he wasn't part of the Valencia hoodie club. He is on the left with the mad look in his eye as he sees the 3 Valencia hoodies being worn. Right after this picture was taken he took all of the ghost chilis that were in his hand and threw them at them! It was crazy! He just had your standard case of "roadie rage" but it got a bit out of hand.

For the rest of the day most people wore these gas masks just in case of another ghost chili attack.

Halvo thought it was pretty funny and had to take a picture. He didn't realize the full potential of the danger he was putting himself in! A ghost chili to the eye can be the end of a bass player's career!

Here's Shane, Quinn and Matt playing with a stray dog we found in Justin's yard.

Here he is again. We named him Colonel Mudd Butt.

They were totally cool with us bringing in the stray dog and Max began to try and train him.

I'm not really sure what's going on here, actually.

Did I mention that Max was on tour with us for a few days! Here's him eating hamburgers.

Here's a video of the official passing of the torch conversation. Max was teaching Dan the ropes. Max just kept saying "if you don't play Safe To Say right...  I'm going to turn this place into a car wash!"

More of what was going on outside. Quinn got hit by some gnarly ghost chili juice by Tyler for his Valencia hoodie-wearing and he JUST had taken off his gas mask. PHEW!

This was happening inside. A dance party. Wapner is always coming up with new dance moves. George was clearly not impressed and stood still the whole time. He told me later he just wasn't a fan of the song they were dancing to which was "Man, I Feel Like A Woman" by Shania Twain. Halvo LOVES that song.

Here's Jimmy's party face. He watched a movie called "A Serbian Movie" and this was his reaction for a few days afterward. This movie makes Requiem For A Dream look like Aladdin. It's pretty wild.

The day took a crazy turn when the dice were taken out.

Here's a shot of Wapner right after receiving word of the Cee-lo tournament.

Tyler was so tired from all that ghost chili throwing that he fell alseep while taking out his money.

In Chico, CA... money really does grow on trees.

Bryan (Runner Runner's sound guy) won all of our money with his weighted dice. We were so mad, but we should have realized what was going on when he insisted that he rolled his own dice every turn instead of the same ones everyone else had been using.

The next day was Portland, Oregon. We stayed in Eugene, Oregon (or as Max says "Eugene, Portland"... he's convinced Portland is a state). We drove early to Portland, Portland to get some Voodoo Donuts and Max was like "Keep Portland Weird? Take a pic of me doing this weird thing in front of it". Really, Max? That's the weirdest thing you can think of? Even after you did this:

Here we are walking up to Voodoo donuts, we collectively ate around 20 donuts. We are insane.

Tune in next week for some sweet photos of singing R. Kelly at karaoke with Scott Stapp, us playing basketball at the top of the space needle with Sean Kemp, us hanging out with Karl Malone (The Mailman©) at the Mormon tabernacle and some shots of us tapping the Rockies (literally).