Welcome to the fifth and final edition of my On Your Side Tour photo blogs! This is another GIF-laden post entitled "'Tis Better To GIF Than To Receive". This also has quite a few photos of A Rocket To The Moon who were so generous to take us out and were amazing hosts as a headlining band. They are our new friends and brothers and we are going to miss them, until next time! Anyway, check these out!

Here's some clapping that happened in Toronto! Everyone loves clapping.

More clapping... this time in a strange shark fin-type motion.

In this GIF, Halvo is doing his clapping monkey impression. He always told me how inspired by those monkey's, with their cymbals and impeccable rythm. He always wanted to grow up to be one of those monkey's but in the recent economonic downturn, the cymbal monkey jobs are down the tubes so he has taken to the bass and is really doing quite well with it, it seems!

Here is a GIF entitled "Lumbering". It's a move they love to do. They have been very inspired by the synced up dancing of Sum 41. They loved the unison slides and shimmys and shakes, but they wanted to do something original. This one they just go backwards in a weird lumbering sort of way, but it really fits nicely with the slow numbers in their set!

After seeing photo blog #4, this young lady really wanted to have a GIF made of her. This one is entitled "GIF me some room". I didn't capture it here, but she was pushing people out of the way so she should be photographed for her GIF... even thought it was already over. I didn't have the heart to tell her, but hopefully she enjoys this one!

This is the line for the show in Pittsburgh. Turns out, the people thought they were in line for a "Fast Five" sneak preview and were sorely disappointed when they found me instead of Vin Diesel. They stayed to watch the show but to appease them, we acted out a scene from "2Fast2Furious". I played the part of Vin Diesel and Shane played Dwayne Johnson's part. We raced for pink slips around the drum set. George was the flag girl. It got pretty intense when I did my monologue about how "that Toyota Supra was my life" and that losing my car meant "losing my life"... I definitely saw a few tears in the audience. 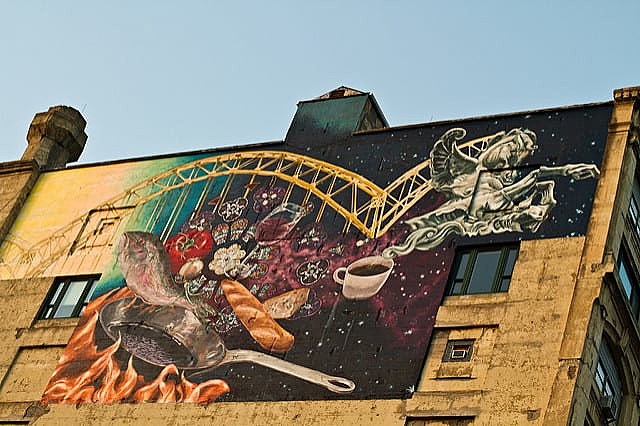 Here's a mural from near the show in Pittsburgh. I'm a little bit disturbed by this. What kind of food are they cooking up over in western Pennsylvania that they think flies up and turns into bridges and inter-planetary flying horses? I'm going to have to investigate this one.

For the last few nights of the On Your Side tour, our very own Dan Pawlovich (Drummer of Valencia and Warped Tour 2008's charity bowling winner of the Horse's Ass award for lowest points in bowling) played some drums and percussion along with Anarbor on their hit song "Gypsy Woman". This one is aptly titled "Cause I don't need what you've been GIFing me, so gypsy woman stay the hell away from me".

Here's a picture of me!!!!!!! Our old friend RJ came out and snapped some photos. We once played in RJ's garage where our old drummer Max played emcee and Shane sang in the key of strep throat to a bunch of people at a sweet 16 party back when we did one of our first tours ever. It was both hilarious and embarrassing. We've come along way, but RJ knows the troubles we've seen. Since then he has also learned to take some awesome photos and this is one of his. Check out his site for some more!

Here is a shot of Andrew from A Rocket To The Moon playing in their side project called "The Jean Jacket Jerks". This punk side project features all of the members of ARTTM playing the same songs... but at twice the BPM. They like singing "Oi!", wearing jean jackets (when possible) and changing the oil to their motorcycles on stage. This GIF is of an entire song in which he plays the same beat really fast over and over. It is some punk ass stuff!

Here is a GIF of the tour photo that we did through several attempts. Our awesome friend from over at Showcase Live took us on a tour of Gillette Stadium (which is where, I'm told, Taylor Swift played 2 sold our football games, or something?) and we got to take a sweet photo. This was an attempt at the classic 'jump shot'. This will be titled  "GIF US A BREAK; We May Not Be That Good At Jumping In Unison, But We Play Some Sweet Music, So Stop Criticizing Us."

Here's just us Valencias (plus one Ryan Wapner) crew posing at the home of our favorite team (this is where the phillies play, right?).

After the tour photos and watching a rocking Cody Simpson show, we decided to play the last show of the tour. As a little end of tour gag, some of the guys picked up Justin and Halvo and their microphones and made them play 4 feet off the ground for a while.

For the first couple seconds Halvo was convinced that he was levitating. He had no idea that the guys were picking him up, he just thought him and his microphone stand were possessed and rising off the ground. George just kept laughing at him like a jerk! Eventually he realized that it was an end of tour prank and he had a good time but fthose first 30 seconds were pretty terrifying, I'd imagine!

Nick was pretty jealous that he didn't get picked up.

So everyone dropped Justin and Halvo and picked up Nick. He stuck his tongue out at Justin because he had more people picking him up. Either that or he was licking off the sauce from the lasagna that we all ate earlier at dinner... it's hard to say and we may never know. All we have is this photo.

This one is called "GIF Thanks." To get real for a second, I want to thank A Rocket To The Moon for taking us on this tour. It's been one of the most fun tours we've ever been on filled with some of the best people and we wished it would never end!

Clearly Greg wished it would never end, so he decided to grind on Justin for the remainder of the show!

Sincerely, thank you to Rocket, Anarbor, Runner Runner and Go Radio... All the people who came to the shows... All who read my blogs... and AltPress for hosting them and spreading the word of how awesome The On Your Side Tour truly was.

Thanks again and see you this summer!