If you’re obsessed with the soft-spoken internet phenomenon-turned-metal queen Poppy, then you know she’s successful in a myriad of entertainment areas.

With multiple albums available for streaming and an array of YouTube videos featuring her dream-like, calming makeup videos and more, it’s fair to say Poppy always knows how to keep fans on their toes with her quirky content.

Read more: 40 new artists you need to hear in February

From her first album under the moniker That Poppy to I Disagree‘s heavy guitar riffs, urgent screams and insane guest vocalists, see which album era your personality aligns with most below.

It’s been quite a while since Poppy was signed to her former label Mad Decent. However, it looks like she still has quite a few things to say about the record label founded by Diplo.

In October 2020, it was revealed that Mad Decent is releasing an exclusive vinyl featuring Poppy’s old music. Now, Poppy says that she never gave her former label consent to release it.

Read more: QUIZ: Do you remember which celebrities appeared in these iconic videos?

Back in 2019, Poppy signed to Sumerian Records. Since then, the partnership appears to be going smoothly. She kicked off 2020 with the release of her I Disagree LP, which was soon followed up with the deluxe edition, I Disagree (more).

More recently, she put out Music To Scream To, the soundtrack for her second graphic novel, Poppy’s Inferno. The effort includes six new ambient songs that are all appropriately titled “Scream.”

Now, it looks like Poppy still has a few things to say about her former label. Fans began to tweet that a vinyl pressing of “Girls In Bikinis” and “Fashion After All,” off 2018’s Am I A Girl?, is being released through Mad Decent. Fans first spotted the exclusive vinyl on Record Store Day‘s website.

Read more: It looks like Guitar Center may be preparing to file for bankruptcy

However, Poppy made it clear that she didn’t give Mad Decent consent to put out the release.

“Don’t buy it,” she tweets. “I didn’t consent to the release of that.”

Soon after, Poppy followed up with another tweet about how grateful she is to no longer be signed to Mad Decent.

“I’m so glad I’m not signed to Mad Decent anymore. A bunch of fuck boys under one roof.”

With this, it’s clear that Poppy doesn’t want fans to buy the exclusive release and support her former label. 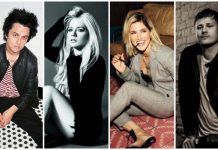