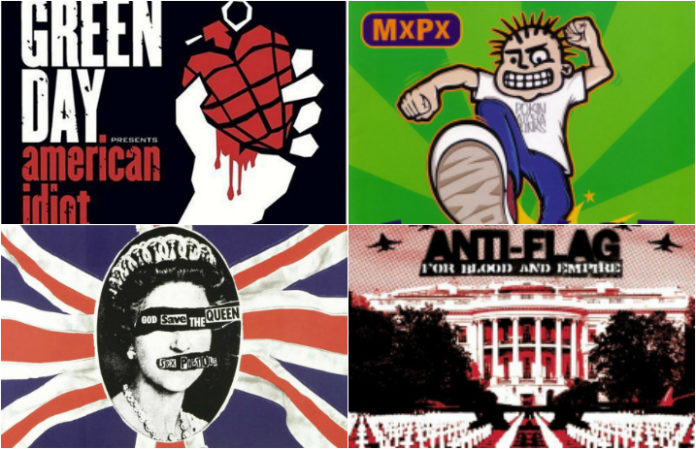 Are you ready for Trump’s America? Like it or not, here it comes.

On Friday, as the new president recites the oath of office and attends inaugural festivities at the nation’s capital, we’ll be blasting these 10 political punk songs (and many, many others). What will you be jamming?

Notwithstanding the fact that Green Day initially wrote “American Idiot” to confront the “redneck agenda” of George W. Bush’s presidency, the Grammy-nominated protest song feels apt to receive the 45th President of the United States. Moreover, the band themselves have taken to retrofitting the four-chord philippic for “subliminal mind-Trump America” in the wake of an ever-increasing fake news epidemic. Everybody do the propaganda.

NOFX – “We Called It America”

The opening salvo on NOFX‘s utilitarian 2009 album, Coaster (or Frisbee for vinyl buyers), “We Called It America” finds frontman Fat Mike spitting out the ruefully nationalistic vitriol as fast as the pummeling punk beat will let him. “Remember when America had a middle class and an upper class?” The social divide continuing its chasm, the musician bemoans the bygone “number one America,” calls out Fox News for their transparent spin and equates corporate welfare with a dine-and-dash fleecing.

Anti-Flag‘s “Confessions Of An Economic Hit Man” cribs its title from the novel of the same name, John Perkins’ semi-autobiographical takedown of corporatocracy. Singer-guitarist Justin Sane and his longtime activist wrecking crew make it their own, vengefully vilifying the American Century’s “iron fist for blood and empire” and (what the book describes as) in-the-pocket U.S. contractors’ wartime racketeering of the Third World.

Rise Against – “State Of The Union”

“If we’re the flagship of peace and prosperity, we’re taking on water and about to fucking sink.” So begins Rise Against‘s exegesis of the American Dream, the opening statement on their 2004 major-label debut, Siren Song Of The Counter Culture. Leader Tim McIlrath’s studied words on injustice exhort the masses to take action before our own graves suggest our guilt.

It may seem somewhat outlandish now, but let’s hope incoming President Trump doesn’t actually lead us into “World War III.” The last track on Bad Religion‘s debut EP, this 55-second blast imagines an apocalypse where a lethargic public “listen[s] to what the president says” while nuclear weapons are primed for launch. Interestingly, it’s the song’s narrator who finally drops the bomb, not the prez, and the next one’s coming “into your living room.”

Propagandhi – “A People’s History Of The World”

You can’t have a list of political punk songs without including Propagandhi. “A People’s History Of The World,” from the band’s sophomore effort, Less Talk, More Rock, emphasizes the importance of knowledge in challenging a failed political system. “We’ll teach ourselves to analyze and understand…and share it with each other.”

Not quite a “punk” song, but perfectly punk in spirit, Motionless In White‘s “A-M-E-R-I-C-A” takes a cinematic tack in revealing the gritty, personal layers of a faded American glory. Vocalist Chris Motionless denounces the shiny veneer atop the sinister, state-sanctioned score: “I’m living one big nightmare/the ugly truth has a model face.”

“Would you die for your country?” On MxPx‘s second album—Teenage Politics, hey!—the pop-punk trio explore the meaning of allegiance and the philosophical underpinnings of equality on cuts such as “Democracy” and “False Fiction.” On “Americanism,” songwriter Mike Herrera depicts an unnervingly idolatrous patriotism and further indicts the U.S. military. “Why aren’t we against them?/Because we know that they are wrong.”

Sex Pistols – “God Save The Queen”

An oldie but a goodie, the Sex Pistols‘ “God Save The Queen” turned British nationalism on its head just in time for Queen Elizabeth’s Silver Jubilee in 1977. The commercial antecedent of almost any anti-government punk song today, it still kicks major ass. We mean it, maaaaan.