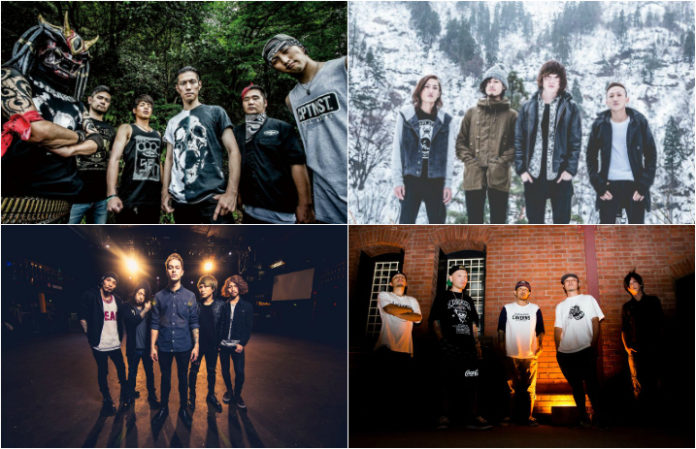 Japan has gifted the rest of the world with several sought-after things, including their tasty cuisine, anime and, of course, music. From established bands like X Japan and Dir En Grey to more recent acts such as BABYMETAL and ONE OK ROCK, this island country has proven itself as a musical trailblazer. With so much talent left to discover, here are some of the best new acts to burst out of Japan:

A CROWD OF REBELLION

Formed in the spring of 2007, A Crowd Of Rebellion have broadened the playing field for screamo across the country. Since then, they have signed with Warner Music Japan, played Knotfest Japan 2016 and are currently on their first headlining tour in support of their debut full-length album Xanthium.

For fans of: Coldrain, the Animal In Me

Tokyo-based Alternative Medicine pride themselves on their catchy melodies, hard guitar riffs and fast beats. Having toured with bigger pop-punk acts such as the Wonder Years, Valencia and Hit The Lights, this three-piece act is all set to go for the release of their first full-length album, Forever, in the near future.

Check out: “The Way”

For fans of: We Are The In Crowd, the Summer Set

This electric sextet are known for their highly technical and experimental style that blurs the line between emo and progressive rock. Their most recent feats include playing the fifth anniversary BAYCAMP Festival in September.

Check out: “The Next Page”

For fans of: ONE OK ROCK, Unison Square Garden

Despite their large fan following in their home country, Nagoya-natives Coldrain are just emerging onto the American music scene. They embarked to the U.S. this past summer for their first Vans Warped Tour, and put out their fourth studio album, Vena, last year.

Check out: “Born To Bleed”

For fans of: My Chemical Romance, Destroy Rebuild Until God Shows

Metalcore mavens Crystal Lake have had one of the biggest years of their careers, and it’s only uphill from here! Since the departure of their former bassist Yasuyuki Kotaka in August of 2015, the band has been signed to Artery Recordings and just dropped their latest release, True North.

Check out: “Black And Blue”

For fans of: We Came As Romans, Miss May I

EACH OF THE DAYS

Formed after the split of melodic death metal band Lost Eden in 2009, Each Of The Days have shared the stage with many other well-known overseas acts. Their song “The Distortion” was featured on the soundtrack for horror flick Saw VI, along with Hatebreed and Chimaira.

Consisting of five kick-ass musicians, this visual kei metal band have a remarkable arsenal of releases including four full-length albums, eight EPs and features on 11 omnibuses. They were featured on the Silent Hill soundtrack and made their U.S. debut at Seattle’s Sakura-Con in 2011.

For fans of: Girugamesh, VAMPS

Five New Old’s eclectic sound is a blend of punk, R&B, gospel and pop with a late ’80s/early ’90s twist. The funky four-piece has toured with bands such as Quietdrive and the Cab, and completed their first headlining tour last year in support of their debut album Lisle’s Neon.

Check out: “Ghost In My Place”

For fans of: The Cab, Set It Off

Founded in early 2014, I Promised Once was established with a single goal: to create the perfect fusion of heavy metal and EDM. With most of their fanbase divided between Japan and Germany, they look to make an impact on their home country’s music scene while showcasing their unique sound across the globe.

Check out: “Far Away”

For fans of: Storm The Sky, Of Mice & Men

KEEP YOUR HANDS OFF MY GIRL

Abbreviated as KYHOMG, this metalcore band is still blazing forward as a foursome following the departure of their former guitarist Tak in 2011. They are currently signed to Zestone Records, whose alumni include famed electronicore act Crossfaith.

Check out: “With You”

For fans of: A Skylit Drive, Sleeping With Sirens

Thrash five-piece T.C.L have faced several lineup changes leading up to the present, but that surely hasn’t slowed them down on their musical quest. Currently, the band is recording the follow-up to their 2013 debut release, Tremendous CLassixx.

For fans of: Awaken I Am, Trivium

Describing their sound as “dreamy and powerful” with a “fresh sense of running and floating at the same time,” the emo/post-hardcore group are spirited in their tight technical performance. The Winking Owl are set to embark on their headlining Wink The Future Tour next month.

Check out: “This Is How We Riot”