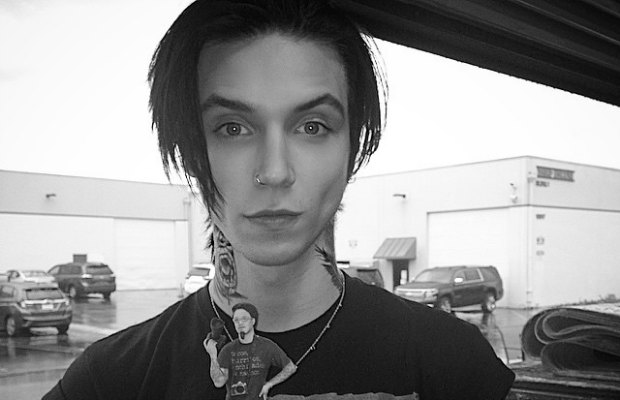 Over the past year and a half, it’s been all “Cara Delevingne this,” “eyebrows on fleek that,” “blah blah tweezers.” Naturally, when you’re up to your forehead in think pieces on the merits of waxing vs. threading, it’s hard not to notice them. Eyebrows are more than just the reverse moustaches of the eyes, they’re a way to make a statement (and one that isn’t just “Do you smelllll-la-la-la-laowwwl what the Rock is cooking?”).

If you can’t beat them, join them, and celebrate these artists who are all about the here and…‘brow. #EyebrowRevival

**EDIT: We have added Cody Carson, Frank Iero, Jalex and Kier Kemp due to overwhelming reader response. Because, you know, we want to be completist in our eyebrow coverage.

Biersack has a dramatically angled jawline, angled cheekbones, angled hair, and perfectly angled eyebrows to complement it all, of course. Boy must use a protractor for those things

You can feel the intensity of those perfectly sculpted brows from miles away. More like A Furrow Inside…

If your eyebrows suck, you suck. pic.twitter.com/t3hWzJFIRy

“If your eyebrows suck, you suck”

These sinister arches are basically worshiped by MIW’s Creatures.

Palmer’s eyebrows (or lack thereof) are more of an artistic statement resembling calligraphy.

I think having your brows sorted is a prerequisite for starting a cosmetics line (See: Jeffree Star Cosmetics).

Supermodels should be super-jealous.

Thick, dark, 100 percent on-trend and known to dabble in a bit of shaved line action.

ALEX AND JACK, ALL TIME LOW

First lesson in conveying human emotion in art: Eyebrows mean everything, and if you angle them upward in the middle, it conveys sadness. Matty Healy’s brows apply that theory in real life, giving him an amazing perma-pout.

Check out this “punk-chic eyebrow” tutorial.

Her eyebrows have more personality than most people I meet.

CODY CARSON, SET IT OFF

Jenna is the picture of natural vibrance and her effortless, tidy eyebrows only enhance her glow.

Well-groomed beard, well-groomed ‘brows. This is a man who clearly takes care of himself.

KEITH BUCKLEY, EVERY TIME I DIE

Though untamed in comparison to most, Buckley’s more rounded eyebrows provide the perfect accent to his face.