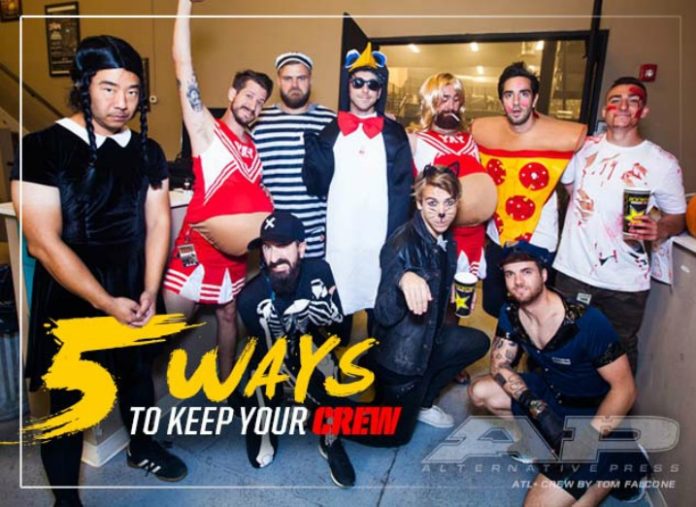 The often forgotten crew members are a crucial part of successful touring. Whether it’s a small show with an opening band and their friend selling merch or a sold out Taylor Swift stadium show with 100-plus people making sure the production goes off without a hitch, they are essential and valuable human beings. Here are a few ways to keep them for the long haul.

One of my favorite stories was from a crew member for a large artist touring arenas. The singer of the band kept his distance from everyone on the tour other than a select few, which was part of a clause in the contract that people (even those on the same tour) weren’t allowed to make eye contact with him or talk to him. In the catering room on the final day of tour he walked out to finally acknowledge the crew for their hard work and being so crucial to what he does. It was a heartfelt, impassioned speech. All of a sudden he was interrupted by someone yelling, “Hey Jackass, that’s the local crew. We’re the people that have been on tour with you.” The room broke out in laughter, and the artist walked up to their table and rehashed the same, fake, emotionless speech. The crew hated him. Moral of the story: Don’t be this guy. No matter the size of your band, treat your crew with respect.

Keep tabs on everyone you’re touring with, and make sure everyone is fine throughout the day. If you have free time and you’re going out, see if they need you to grab food or drinks. Random acts of kindness go a long way. If someone looks down in the dumps see if they want to talk about it. The opposite also applies to this category. If someone acts like they need space or verbalizes it, then give them space. Some people deal with touring in different ways. If you read them the right way, you know not to act like an annoying Applebee’s server begging them to get an Appeteaser if they’re not hungry. If they’re an introvert, let them be a fly on the wall.

There are many ways to break up the monotony of touring for weeks on end. A major way to do this is using off days wisely. When you’re not playing a show, do something fun and use your band fund to include everyone in your camp. At the very least treat everyone to what touring folk call a “family dinner.” You are a family on wheels, so treat each other that way (minus the bickering and fighting with your siblings part). Take advantage of traveling and be a real tourist. See the Grand Canyon, or, if you’re abroad, go to some awesome national landmarks. If it’s hot in the summer, go to a waterpark. If it’s cold in the winter, go see a movie or do whatever you can to blow off some steam. Happy workers mean better workers—this goes for the artists and the crew.

This could be the most difficult and awkward thing to deal with. Artists want to make the most money possible, but depending on their size there’s only so much they can afford to pay per week. Communicating the job titles is important to establish that artists aren’t overworking their crew by designating several jobs per person or taking advantage of them. Look over your numbers and if you notice a substantial raise in profits in certain areas it may be time to give them a raise. It’s very much up to the artist whether they want to pay more or not. I’ve also seen people making tons of money for their artist and get paid the financial equivalent of peanuts. Paying appropriately as you gain popularity will keep things running smoothly. Be honest if you’re starting to hurt financially, and give the crew a heads up so you don’t blindside them with a pay cut or layoff.

At some point in their career, artists have to deal with losing a crew member for a number of reasons. The most important thing to learn here is how to end on a good note. Just like any relationship, there is a large chance you will see this person again. Why burn a bridge if you’ll most likely wind up on tour together in different camps? Unlike band members, crew people are usually fair game for other touring parties to snag if the price is right. My band paid our merch guys around $250 per week, and I still remember when one of our friends moved on to bands like Tokyo Police Club and Passion Pit. Then it lead to Usher, Katy Perry and Green Day tours. Jumping from $250 to easily over $1,000 a week is a no-brainer. We had to accept it because there was no way we could match it. It also makes sense for someone to leave if they’re unhappy and would be happier somewhere else. Luckily we’ve made amends with these people. You can’t force someone to stay, so the only realistic option is to understand it’s for the best. After all, when you’re good at your job people take notice and want to hire you. Be the best you can and make this a career.