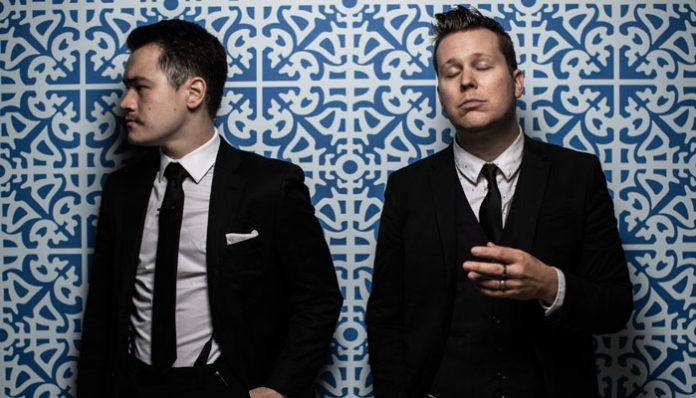 We didn’t ask him directly, but we’re pretty sure that the best part of Josh Scogin’s 2020 was recording the new ’68 EP. Love Is Ain’t Dead. contains three new songs and a cover of David Essex’s eternal groove-jam “Rock On.” Today Scogin and drummer Nikko Yamada released a socially distanced video for the opening track, “Bad, Bad Lambo.” The EP will be released Friday, Sept. 4, with a 10-inch vinyl pressing slated for later this year.

’68 had big plans for 2020. They had a full-length in the can, Give One, Take One, produced by Nick Raskulinecz. There was also an opportunity to flaunt their deconstructionist rock in front of Korn and Helmet fans this summer. Obviously, coronavirus changed all that. By this past spring, Scogin had written three new songs and was aching to get them recorded. Raskulinecz was available, and the band busted them all out in a week. Not an album but cooler than your typical stop-gap project, Love Is Ain’t Dead. will sate fans and electrify new listeners.

Read more: Josh Scogin of ’68 doesn’t know what to do with himself at home

Scogin ran the gamut of emotions to Alternative Press. He’s certainly affected by the sadness happening in the world. But he revels in the joy of being able to play loud rock music with his friend for the first time in six months. Most of humanity is looking for small victories to get us through these days. Love Is Ain’t Dead. doesn’t shy away from the bad things in the world. But it does remind us how we can persevere with a horizon of wild guitars and far-out sounds. Yes, the world is as sad as it seems. But ’68’s brand of rock continues to deliver sonic wonderment and some much-needed personal redemption.

Besides writing a few songs, what have you been doing under lockdown? Have you put together any good puzzles lately?

I’ve been doing a lot of cooking. I’ve been trying to do a lot of Mediterranean dishes and just real spicy things. It’s been my go-to art function since my normal art function of performing songs has not been happening. Plus, it gives me something to eat afterward.

You and Nikko returned to Rock Falcon Studio to work with Nick Raskulinecz for Love Is Ain’t Dead. Was it a socially distant recording experience?

Yeah. We drove from Atlanta to Nashville. We drove separate vehicles, not necessarily because of social distancing, but just because it was easier. It was just me and him, and then when we got there, Nick. We made it work, made sure we hand sanitizer all the time and recorded it real quick. We had drums done in a couple of days, and then I think we spent two, maybe three days on everything else. And then Nick took a while to mix it because he was doing some other projects. But it was quick for us.

I bet you and Nikko coming together to record and play after so long felt like a homecoming.

Oh, big time. I think by the time we got together, we hadn’t seen each other in about six months. Which is by far the longest we had ever known. We’ve never had that amount of time off.

There’s plenty of amazing WTF moments on the EP. The guitars still bring the riffs, but there’s still all those random noise elements that you couldn’t possibly write. A lot of the band’s appeal is built on the pursuit of happy accidents.

So much of it. I love it. That’s why when humans are performing the stuff and not just copy/pasting [on the computer] along the way, accidents or wrong notes or whatever happen. There’s a bunch of nuances here and there that completely happen in the moment. It’s littered throughout all the ’68 records. This one, presumably, might have more per capita because of the fact we were in a bit of a rush. It was a runaway train. Like, “Let’s take this new route.” I have a general rule: If something makes me chuckle, we’re definitely going to keep it.

There are three new songs and a stunning version of David Essex’s classic “Rock On.” The new songs have a bit of doomsaying on them. Lyrics such as “One million miles an hour won’t catch you, my friend” (from “Nervous Passenger”), “Nowhere to run, but we can still hide/But it’s a long shot” and “Do you remember when/We took tomorrow back?/It ain’t over yet” (from “Bad, Bad Lambo”).

Yeah. It’s hard, man. I generally try to be positive. I’ll be honest: It was hard to write. It’s really, really difficult to be in a spot where rock ’n’ roll doesn’t really matter if people are killing each other over some skin color. Then you just think about rock ’n’ roll and the stuff that I do. And it’s like, what’s the point of it? I could be very downtrodden and find it hard to want to create. Creating art is a big therapy for me and helps keep me balanced. It was me expressing what was going on in my mind. I know not everyone has that option to be able to create like that. So I’m very grateful to be able to do it.

Under different circumstances, ’68 would be on tour with Korn right now instead of talking to me.

Our first show was supposed to be this week. I had to delete it from my calendar. Right now, every single thing is literally just a question mark. But I’ve talked to some of the dudes in Korn, and I know that they are going to try and still do the tour with the same bands. Obviously, they can’t speak for the other bands. But for us, I know we would do it. Nobody knows. We don’t know if a vaccine is going to come and just be the savior of all. It’d be nice to play music again and to have people get together and have the energy of the crowd and humanity coming together and supporting each other, maybe in some sort of camaraderie of the love of music. They give me hope for humanity.

Because of that time away from the road, you’re probably feeling frustrated because you really can’t do anything, and you really should be going out and doing stuff. Did you go into the studio and play harder with bone-snapping viciousness? Was it cathartic?

I’ve never had this kind of time off from touring. So my body, my entire ethos has never [gone] this long without loud music coming out me. For six months, I’ve had none of that. One of the very first things we did was set up all of our gear. We were laughing like idiots because we were just setting cabs up. It felt good to lift a cab over another cab and set it on top of each other. And setting the drums up. When we finally started playing, we could feel all of it coming through our bodies.

I love your records and the live show equally. Bands have been doing big-production livestreaming events. Code Orange, Thursday and Underoath have done them. Gigs with production values with no audience, just a camera crew. Would ’68 ever entertain that notion? Or do you truly think you need an audience to bounce off?

That’s a tricky question. It’s come up multiple times with my team. They’re like, “Hey, this is the thing that’s happening.” And I’m like, “Well, did you see the WrestleMania stuff with no crowd?” It feels like bizarre performance art. So every time they bring it up, I’m like, “No thanks.”

A lot of bands swear by the X factor of the energy of the crowd.

I get that. But I believe that as a performer, you’re the one that sets the bar. If a crowd is just not feeling it, me and Nikko can still have a great time. We’re not going to be ruined for the rest of the day. You hear a comedian say, “Oooh, rough crowd.” Well, maybe you might not be funny. Having said that, I think there is a world that we could exist in where we might do something someday. But it’s got to be something that makes sense.

What about watching ’68 practice via livestream?

We’ve talked about that before with our team. But I’m not going to just charge somebody something that doesn’t cost anything. It seems dry. With touring, I’ve driven a thousand miles to be wherever I’m at. Charging a little bit of money to come in and see us makes sense. But band practice doesn’t cost me anything. Why would I charge? I haven’t figured out a way to justify charging something.

Well, you know, quality olive oil is pretty pricey, like $8 a bottle. If you’re cooking Mediterranean, you’re going to need to get paid.

[Laughs.] A lack of money is definitely a motivator. But it’s not the only motivator. My team is like, “Well, you know, you haven’t made any money this year.” And I’m like, “Yeah, but not at the expense of the art.” It’s got to make sense. I don’t know what that looks like in a vacuum world where there’s no audience. Maybe I’ll figure it out.