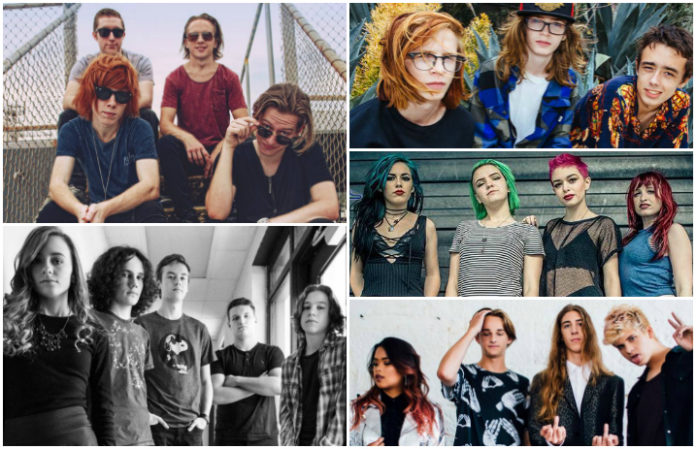 Remember your high school Battle Of The Bands competition? For music lovers everywhere, this annual event was a pivotal part of adolescence, but for many of these aspiring acts, the dream ended once college began. Very seldom does a band break out before graduation, but a handful of groups have managed to march on, proving that age really is just a number.

If this is your first time hearing this name, then you haven’t been paying much attention. Baltimore-based Bad Seed Rising are on the rise to superstardom after playing this year’s Vans Warped Tour and releasing their debut album Awake In Color in September on Roadrunner Records.

For fans of: Marmozets, Letters From The Fire

Don’t let the rainbow hair fool you: Doll Skin are one rough and tough act to follow. Expressing themselves as “glitter-fueled, teenage, punk-rock superheroes,” these Southwest rockers are definitely more than just a pretty face, having toured extensively around the West Coast with bands as diverse as Dead Kennedys and Escape The Fate.

Check out: “Let’s Be Honest”

For fans of: NOFX, Cherri Bomb

After meeting at a local rock school, the members of First To Eleven have known from a very young age that they wanted to play music. While regularly posting a variety of tributes on their YouTube channel (including a masterful cover of Twenty One Pilots’ “Heathens”), they also have their own original songs that can be found on their debut EP Out Of Time.

For fans of: Courage My Love, PVRIS

With their vocalist Sara Menoudakis being the youngest member at only 14 years old, Canadian rockers Motion Device show that talent runs in the family. Made up of three siblings and a cousin, the band have performed together for over six years, releasing  their debut full-length Eternalize last year. They’ve also gained praise from rock ’n’ roll legends such as Alice Cooper, Jane’s Addiction and Twisted Sister—talk about star power!

Dubbed “the badass teen band that just might change rock music” by the Huffington Post, these three friends play a sophisticated blend of grunge and today’s underground hits. The Texas act is ready to bring the spirit of the ’90s back, and their efforts haven’t gone unnoticed: They were recently signed to Sire Records, who issued  their Salsa EP in April.

With all of their members still in school, the future looks incredibly bright for these young rockers from Down Under. Launched by twins Will and Matt Tyler, along with their younger brother Mitch and friend Bryce, the band released their latest EP, She Draws The Heart Out Of My Love in September and toured Japan last month.

For fans of: Go Radio, Sparks The Rescue

Reminding us of the beginnings of skate punk comes Stellar West, a trio of loud and fast young rockers from the Chicago suburbs. Their biggest accomplishment to date has been opening up this year’s Riot Fest in Chicago—an introduction to greater things as they prepare to release their first LP, Unfiltered.

For fans of: Operation Ivy, Rancid