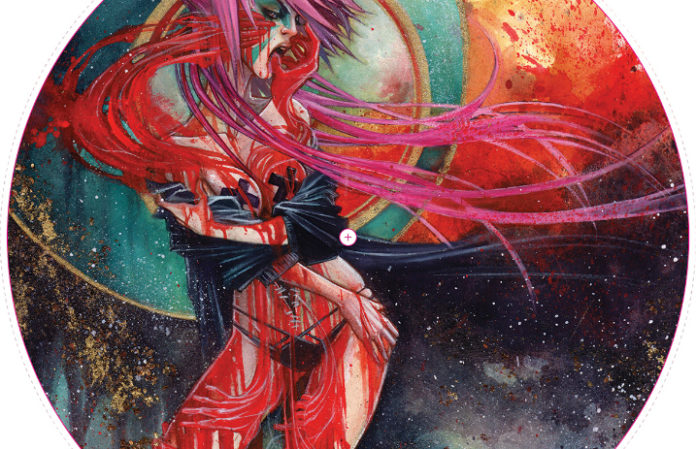 Get your wallets ready: November 19 is officially Local Comic Shop Day! Similar to Record Store Day (which has grown massively in the last few years), LCSD is a way to bring comic fans out to their local shops with enticing exclusive content, with everything from variant covers, new hardcover collections and more.

Black Mask Studios stepped things up with an exclusive item they’ve kept under wraps for a while, the Godkiller 12-inch vinyl picture disc with audio from the animated film. This is the counterpart to the first-ever Godkiller hardcover 304-page deluxe collection for that hardcover artwork by Alexis Ziritt with a page size larger than standard comics. Maybe LCSD has more in common with RSD than we thought. Here’s the list of bullet points why AP readers need to pay attention to this sweet release.

Godkiller is a badass story.
Written by Matt Pizzolo and illustrated by Anna Wieszczyk, Godkiller is a post-apocalyptic story about a young kid (Tommy) meeting an unlikely friend (Halfpipe, the slave girl who steals people’s organs to buy herself out of slavery) and together they travel the wasteland to find a new heart for his sister. If you’re reading this and just plan on grabbing the record, you should highly consider getting the hardcover edition of this series coming out the same day.

The record is limited to 666 copies.
That’s right. Perhaps the only appropriate number for this beast of a release.

Voice acting by AFI’s Davey Havok
Punk’s lord of darkness blesses this franchise with his voice, getting us stoked for a new AFI album.

Voice acting by Motion City Soundtrack’s Justin Pierre
We’re still sad that his band came to an end, but hearing Pierre’s voice again on vinyl will be so bittersweet.

You’ve seen him in Aliens, The Terminator and AVP: Alien vs. Predator. Now he brings even more legitimacy to this tale.

She’s graced the screen in Halloween 4: The Return Of Michael Myers and Halloween 5, in addition to helping our nostalgic hearts beat by lending her voice as Debbie Thornberry in The Wild Thornberrys.

A brutal post-apocalyptic story should obviously be accompanied by the sonic chaos of Alec Empire and co.

A record is being released on a day for comics and it makes perfect sense.
Black Mask is part of the Epitaph Records family, and they’re brilliant for marrying the comic and music world once again. Hopefully this is the release that gets you to set foot in your local comic shop for the first time!