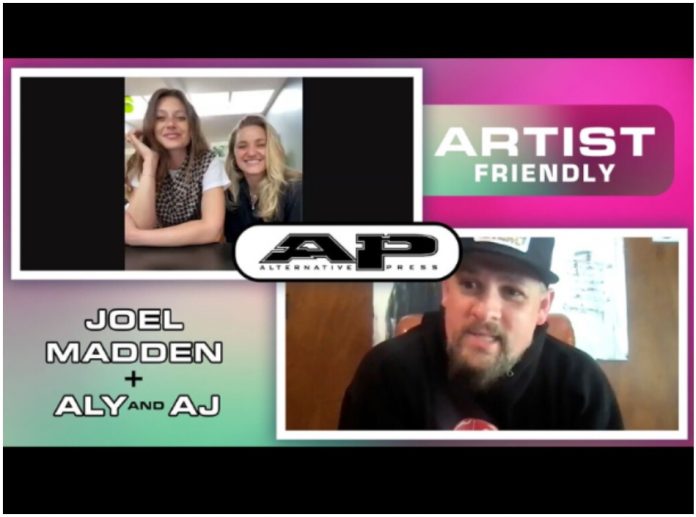 If Aly & AJ’s new record makes you feel happy and warm, then it has accomplished exactly what they hoped it would. a touch of the beat gets you up on your feet gets you out and then into the sun is an album infused with pure joy. When they set out to make it, the sisters wanted fans to feel as if they were basking in the California sun. Energetic guitar riffs and mellow synths emphasize that feeling of West Coast euphoria.

Read more: Charlie Rolfe knows As Everything Unfolds can’t fit into one genre

The album title came to them last summer during a recording session lunch break. Other artists might shy away from a long name, but Aly & AJ weren’t intimidated in the slightest. Taken from the chorus in “Don’t Need Nothing,” the phrase is more than just a title to them. It’s a mantra, summing up the carefree and self-love vibe that can be heard throughout the entire record.

It also represents who Aly & AJ are as artists and people. Fiercely independent, they know what they want to achieve with their music. Over the years, the duo realized that they want their music to be a bright spot in the world. Even though they encounter people who think it’s too boring, too nice or too sweet, they’re not discouraged. Everyone goes through their own struggles, so Aly & AJ’s hope is to inspire positivity and be a reminder that life gets better.

This was also their goal with their 2019 EP, Sanctuary. They wanted to create an authentic refuge where fans could feel safe. The sisters recently saw the outcome of this firsthand during a virtual meet and greet where they were able to directly connect with fans on a personal level.

In an exclusive Artist Friendly interview with Good Charlotte’s Joel Madden, Aly & AJ delve into their latest album, why they have the best fans, how they deal with haters and more. You can read an excerpt of the interview below and watch the full interview on Alternative Press’ YouTube channel.

JOEL MADDEN: I feel like this record is getting really, really warm reviews and reception. No. 1: It’s a great record, and there’s a real effortlessness to this record. I think people are happy to see you girls. I think they’re happy to see you putting music out. I think it makes people feel good. And I think you have these really dedicated fans. And I told you guys this when I went and saw your show. You have these hardcore fans that need to hear from you. They’re waiting for the next message. And one of the things I like the most about your music was seeing it all come together at a live show when I saw all the fans and I saw you guys, and it was a packed room full of what I thought was just really great music fans. It was a super-diverse crowd of different kinds of people. It’s on the alternative music spectrum. It’s like a mixture of all these different kinds of music. And I think it’s super cool AP’s covering it. I think the record looks awesome. Congratulations.

AJ MICHALKA: The write-up meant a lot. We love what AP wrote.

AJ: It’s neat because you have witnessed it firsthand. I think that our fans feel very safe with us. It’s why we named that EP Sanctuary because we do feel like what we’re here to do is create a sanctuary for our fans. I think that’s what we bring to our live set. And I think this record is just authentically us, and our fans recognized that immediately, which is so neat when people actually understand exactly what you were doing.

ALY: Yeah, we didn’t have to explain the process to them. It just made sense. It’s interesting even seeing, how you were talking about, seeing that the fanbase is this diverse, eclectic mix of people. And our producer, Yves [Rothman], the other day did a virtual meet and greet with us. Fans were asking about the record and maybe like how things were made or, “How’d you mic the drums?”—stuff like that. And it was really interesting to be able to see Yves understand the fanbase in a much more direct way than us just telling him or just seeing a post online.

ALY: It was just cool that he was able to witness that himself and was in this virtual meet and greet for like three hours, just getting to know people.

MADDEN: I think that is how you understand an artist—you have to see them live, and you have to hang in the live context. I’m sure your fans are super stoked on this record. And it’s a big week. Are you doing a lot of promotion?

AJ: Yeah, we’ve done so much press, which is great, but it’s all been on Zoom, which is weird.

MADDEN: Good and bad that it’s on Zoom because you don’t have to go on a whirlwind trip.

ALY: It’s true, like all over the city, like in our car flying to New York or something.

AJ: We actually can shove in way more in a day because it’s just back to back to back from our house. We never leave. We’re planning on doing a New York press run.

ALY: I think [around] midsummer. And then we have a college show this next week that we’re playing in Delaware. The tickets went on presale today, and then they go on sale worldwide on Friday. Even though it’s still a ways off, that’ll also be upon us much quicker than we think.

AJ: And we’ve never had the strategic world tour announcement followed by the album. We’ve never really done the “It all happens at once.”

ALY: Or even just having this much time to sell tickets. We always had like two months, which is insane, and that’s mental. I don’t even know why we did that. I mean, I know why. It was because we would wrap on a project acting-wise and then be like, “Hey, we want to tour.” And then we’d throw it together really fast and go tour and then come back and shoot again, which isn’t ideal.

MADDEN: So that’s the other thing that’s interesting. As young as you both are, now it’s like any artist that comes out now, they’re almost expected to be doing five different [things], like their movies or TV and a clothing brand and this and that. But you guys are some of the pioneers of having these multi-vertical careers, which is interesting. I wonder which career do you enjoy more, or is it both in just different ways or all because you’re not just singers or actresses? You’re multi-talented.

ALY: It’s a mix. I feel like AJ and I really enjoy the songwriting process, and I think we always will. And I think that there’s even a world where AJ and I maybe don’t even just write stuff for ourselves, but it’s for other artists or other collaborators. And it’s not an Aly & AJ-centered project. But then, when it comes to the music and the touring and all that, we love that. We really, truly do enjoy being out on the road. I don’t want to be out on the road eight months out of the year, but being out on the road for four months, five months, I’m down with that. And we get along really well when we’re making music. We don’t have many moments of massive fights or drama or arguments, which is interesting.

ALY: It would be more personal stuff that we would fight about, not the business, which is, I guess, good.

AJ: And then acting, that’s something that in a way, it’s like our outlet to do something outside of each other. It’s the one place that we have that’s a little bit more solo, which I actually think is healthy because when we’re away shooting something, we come back together, and we’re like, “Wow, dynamic duo is back.” It’s refreshing. But I would say we’re musicians who are also actors. I think our heart and soul lies within songwriting and touring. And then I love acting, and I love developing ideas, and Aly and I want to expand on our production company and continue to act. But I also feel like it’s really, really hard to find a great project that you’re really proud of. We don’t really have any control over [a project] as actors.

ALY: Yeah, because as an actor, you’re hired, and you’re one tiny piece of the puzzle, technically.

AJ: Yeah. It could be shit, or it could be great. Unless you’re the producer and you’ve really helped develop it from the ground up, you don’t really know how it’s ever going to turn out, whereas music, you’re like, “I have my stamp of approval on this in every way. I was a part of all of this.” So it feels really good. Acting is still great, but I think music is really where our heart is.