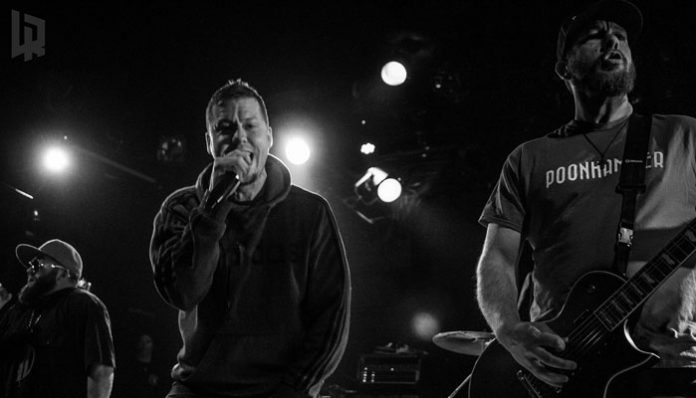 Earlier this year, Salt Lake City-based singer Andrew W. Boss was feeling good. He had just completed a tour with one of his favorite bands (Hed P.E.) and had something bigger to look forward to. The Nu Metal Revival tour was going to have Boss and his band opening for Saliva, Powerman 5000 and other ’90s notables. Of course, the pandemic changed everything, and Boss’ plans took a turn. AltPress is premiering the video for “Patience,” Boss’ reflection on the situation that’s both melancholy and filled with hope.

“Well, we are kinda fucked, to be honest,” Andrew W. Boss tells AltPress. “Our entire show and what we do involves engaging with the crowd. [If] we were on tour right now like we were supposed to be, we would have had to rethink our show without getting close to people. I think all of us in the industry need to figure out how to navigate this whole Twilight Zone episode we are living so the fans and all of us can be safe and have a great time. I think it can be done. But it seems it’s gonna be a minute before that really gets figured out.”

While a fan of the genre, the singer does not rehash standard nu-metal fare, opting for more melodic hooks and choruses. Andrew W. Boss’ next album, The Arrival, is slated for release Aug. 14. Consumed by a shared work ethic, Boss and his band have been livestreaming rehearsals and keeping busy in quarantine. (“It’s the best way for us to hang out with everybody, and I really enjoy that.”) Boss told AltPress about the making of “Patience” and how we as a nation need to manage our expectations for the better.

What was the last Andrew W. Boss live show you played before the pandemic was confirmed and the world went on lockdown? What can you tell me about it?

Our last show we played was the last show of our tour we did with Hed P.E. here in Salt Lake City, Feb. 22 at The Royal, which is a club featured in the video. It was basically sold out to a hometown crowd that had not seen us in a while after a month-long tour across the country. We had already signed onto the Nu Metal Revival tour with Saliva, so we were ending on a huge high note. It was honestly one of the [most] fun shows I’ve played. Hed P.E. have been one of my favorite bands for a long time, so to have our last show and tour be with people we call our friends now and respect so much was fantastic.

Read more: Top 10 artists proving genre is a thing of the past

Was the video shot in a bunch of different clubs or just one? Also, the chyrons on the TV screens were a nice touch. How did you work with the director to convey the alternating joy and sadness you’re feeling about the moratorium on live gigs?

“Patience” was shot in three clubs here in Salt Lake City that we have played a lot over the years. [It’s] a bunch of footage from live shows over the last year. Revel8ion Media had toured with us and filmed a lot of stuff for me already. We had a lot of good ideas, and [the director] knew exactly what I was trying to get across visually. I feel like the video is almost exactly what I was picturing. I’m really proud of how it turned out.

The underlying message here is that with patience, we’ll see this through. What’s your take on bands playing shows in this pandemic? Like that show in Wisconsin? Hard-rock fans think they’re invincible, but these are truly dangerous times.

I think music and concerts are very important for society and people, in general. People need a break from real life as often as possible, and concerts are a great positive outlet. I wish more concerts and touring were happening right now. Rock ’n’ roll has always been a rebellious thing. It grows out of that rebellious side that’s in all of us.

Read more: Here are 10 bands from the ’90s you never heard and that’s a damned shame

But I do think we could do a lot to mitigate spreading sickness. If you’re sick, don’t go to a fucking concert. Mandatory masks while you’re in the building or at the concert. Sanitize, disinfect [and] clean, clean, clean. I’m sure we could come up with a lot of good ideas if we all are willing to work together. People are aware of the risks and a lot of the info that’s out now about COVID-19. I think a lot of people would be willing to wear a mask and be respectful to others around them to go to a concert.

And I think positive energy and positive outlets like music and art and sports can heal a lot of the mentally hurt people right now with the bad economic side of this year. I have a lot of faith in releasing stress in a positive way. Shutting down so many people’s only outlets for stress release can be really harmful in the long run. So I hope we can be smart and figure out the best way to get concerts up and running again.

Check out “Patience” below.