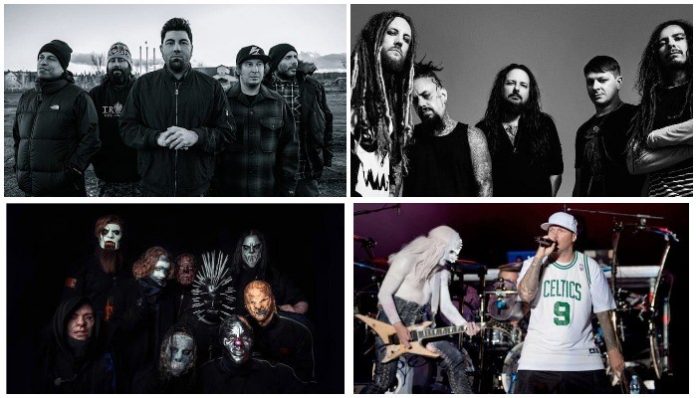 No matter how much the metal community likes to bash the movement, nü metal was undeniably a huge push for the genre to go mainstream. From the super drop-tuned guitar riffs, record scratches, hip-hop vocal style and horribly dated fashion choices, there’s plenty to pick from when you want to make fun of nü metal, yet the genre sparked some absolute bangers.

Here are 10 nü-metal songs that still make you want to jump the fuck up.

While some Limp Bizkit fans will argue it’s all about “Nookie,” true heads know “Break Stuff” is the real banger of their discography. The track’s iconic opening guitar riff is undeniably catchy, and its pissed-off energy is best suited for one of those days where you just don’t want to wake up.

Coal Chamber were one of the nü-metal acts who have been long forgotten (unless you’re really into DevilDriver), but the band had some cool songs throughout their career. Case in point, “Fiend” carried a heavy-as-hell groove and great vocal delivery that’s still worth checking out today.

Korn have a truly unique style which is likely why they were one of the few acts to continue their success after the genre’s boom. A prime example of how they brought something new to music is “Falling Away From Me” which conjured a true hip-hop feel without overloading the song in cheesy stereotypes.

Mudvayne fell on the heavier end of nü metal, and “Dig” shows just how far nü metal could go. The double kick drums, iconic bass riff and growling vocals resulted in one of the best nü-metal tracks to come out, and it still holds its weight against today’s scene.

Deftones have moved into more atmospheric alternative material in the past decade or so, but the band were a huge part of nü metal’s uprising. Their sophomore album, Around The Fur, is fantastic from beginning to end, but “Headup” is a standout with a mean groove riff and gnarly feature from Max Cavalera (Sepultura, Soulfly).

Although much of their material falls closer to thrash, Soulfly had some nü-metal tracks carrying Max Cavalera’s passion for groove over from his earlier days with Sepultura. The band created an absolute anthem with “Jumpdafuckup” which also features clean croons from Slipknot’s Corey Taylor.

While they were always underscored by Slipknot due to the similarity in wearing masks and having a massive amount of members, Mushroomhead have a few songs that are still classics. “Sun Doesn’t Rise” is easily their best-crafted track with an impressive vocal delivery (even if it did get corny at times) and catchy riffs.

8. Machine Head – “Crashing Around You”

As nü metal became the flavor of the day, many bands pivoted their style to lean into the genre. The results were mostly bad, but Machine Head’s move from thrash to groove created at least one ripping track in “Crashing Around You.” The song will forever hold a place in history considering the controversy its video caused for depicting a burning city skyline shortly after the 9/11 terrorist attacks.

Whether or not you feel Slipknot are really a nü-metal band doesn’t change the fact that they had all of the elements of the genre present in a good chunk of their music. Sure, they lean into death metal and other harder sounds, but the hip-hop-styled delivery and record scratches on “Spit It Out” was as nü metal as it gets and still hits hard today.

Nü metal seems to be characterized mostly by the cringe-worthy rapping many bands employed, but Fear Factory showed it could go in a heavier direction without all of the lame tendencies. “Edgecrusher” has a meaty main riff built for smashing everything in sight, and even though some corny record scratches cut through the song, it’s still an absolute banger.