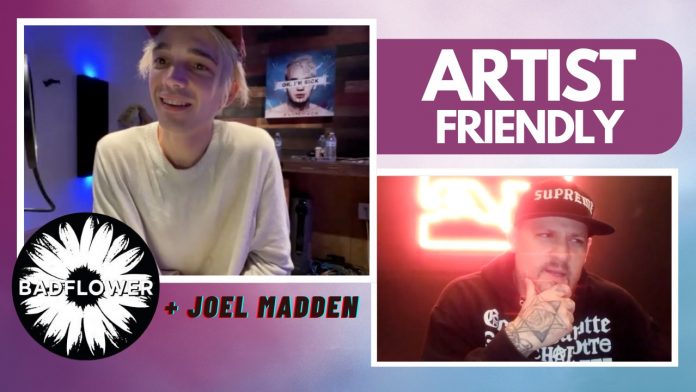 With the recent release of their second album, a gold-certified single under their belt and high-octane live performances, Badflower are crushing it. The four-piece have cemented their presence in the industry as assertive rockers who create music with a purpose. THIS IS HOW THE WORLD ENDS, their second full-length, encapsulates the present day and all of the commotion that follows.

Read more: Badflower on why they set out to create an imperfect sophomore album

At the core of the band lies a strong bond. Vocalist Josh Katz can recall a time when the group had just met, pulled by a string of fate. However, this then-newly formed band had yet to determine the direction that they wanted to take with their music.

In our latest Artist Friendly interview by Joel Madden, Katz spoke on how the band found their sound and so much more. Watch the entire interview and preview the discussion below.

One cycle, I call it. One full cycle, seven years.

Is seven years one full cycle?

Yeah, that sounds about right. Why seven?

Yeah, I can’t remember a time before. I mean, I can remember it, but it doesn’t seem like the same life. You’re right.

It wasn’t the same life before you were in your band.

Did you guys start your band in high school?

No. I mean, I was playing music in high school, but I didn’t meet everybody else until I was probably 20. No, I’m sorry. That’s a lie. I met Joey [Morrow, guitarist] when I was 17. I remember because we used to pay people outside of the liquor store to buy us cigarettes.

No, in Hollywood. We went to different trade schools. He was going to MI. I was going to his school for music engineering. We were living in the same apartment building and then moved in together immediately after. We were in the same building, and we swapped roommates because we didn’t like our roommate, and he didn’t like his roommate, but they got along. So we literally swapped roommates after a week of knowing each other. Then we were living together for a very long time after that.

Then from when you started the band to, say, your first record deal—how many years was that?

Four, maybe? It was a long time because we didn’t take it entirely seriously. We thought we were taking it seriously, but we weren’t. We didn’t know who we were or what our sound was supposed to be. We weren’t even considering our place in the universe.

That’s something that you eventually figure out. You consider who you are to the masses, to the public. What does a fan of your band look like? How does that shape how you look and how do you shape each other? We’re not thinking about any of that. We’re just like, “The Beatles are cool. Let’s make a song that’s ‘doo-woppy.'” You know, just like discovering who we are.

You know how you’re in the early days and you say yes to everything?

You say yes to everything because anyone who even talks to you and talks about your band as a real thing and not just you being a kid. It’s just so validating.

I feel like I said yes to everything and anyone that likes my music. I was like, “You believe in me?”

We should all feel that way when people believe in us. But the danger is if you have too low of a self-esteem. Because you don’t know who you are. Everything sounds good because you don’t know any better. But then you learn who you are, and then at some point, you say no. To me, anyways, from watching on the outside, I just feel like you guys are that. I feel like you’re just doing exactly what you think, feel, see. That being said, I think you’re in full swing of your career.

The world gets a lot smaller. The world feels a lot smaller to me now at this stage. The path used to be blurry, and all the world was big, and it could be anywhere. I can see all of it. So now I’m like, “Do I even like it?” There it is—that’s the path. Am I certain? I see a lot of cool shit along the way, but do I really even… Well, I gotta see it through now. It’s kind of where I’m at now. I got to see it through. I’ve worked so hard to get to this point, and I love it.

I would say with this record, it feels like you know who you are.

I felt it on our first record. Doses of it where things are starting to really happen, and I’m feeling what I’m feeling about this record. I think everything’s going to go really, really well. Knock on some wood. I’m constantly battling with myself, like, “Is this making me happy?

I have no social life now, really. I haven’t for a while, and that’s not because of COVID. I’m an obsessive creative person. Anything creative, I am 1,000% in, and I don’t want to look at anything else, and I won’t talk to anybody else, and this is all I want to do. I’ve always been that way my whole life, but it used to be in moments, and then I’d snap out of it and live a normal life. When I was younger, I had to have a job, so I’d snap out of it and have to work my job. The universe has afforded me all the time to just be creative, and I’m in it.

Watch the full interview here or below!